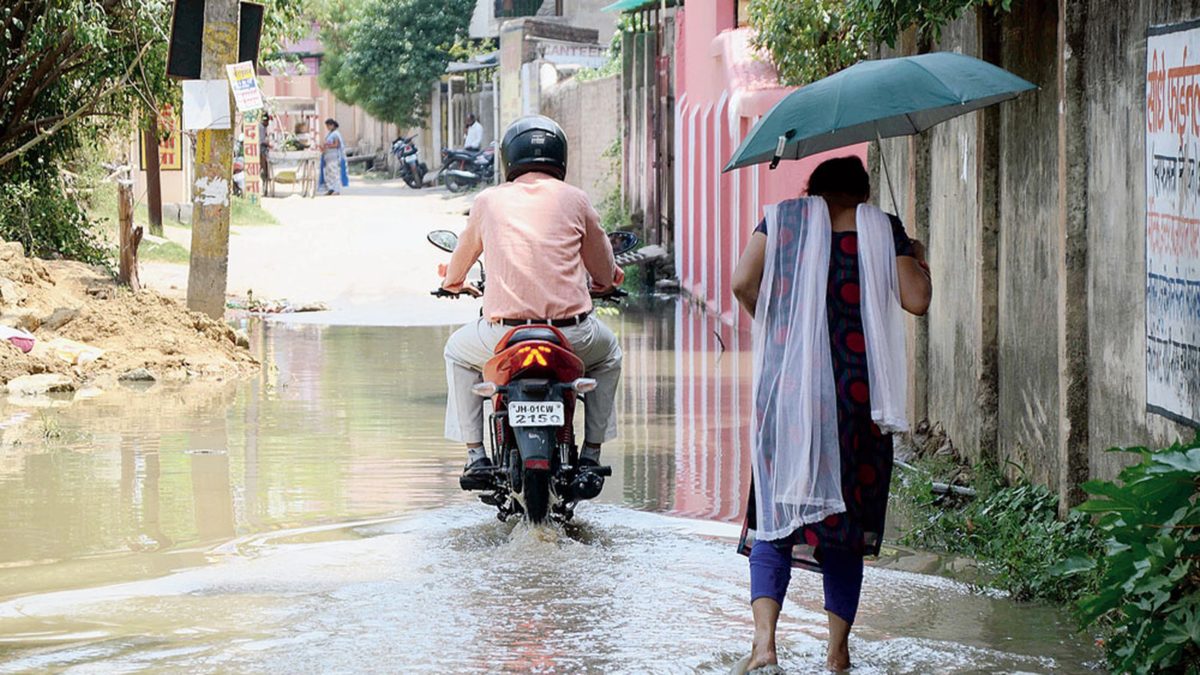 The capital may be reeling from an acute water crisis but a locality in the heart of the city is crippled by flood, albeit of drain water.

A roughly 150-foot stretch of the main road that connects Vidyapatinagar Colony in Ward No. 2 with Gandhinagar Colony and Kanke road has been under knee to ankle deep drain water for 10 days. The reason, said local residents and Ranchi Municipal Corporation sources, is the discharge of the existing sewage onto a waste land has been choked by the land owner, a grade-IV employee of the civic body.

Bhartendu Kumar Jha, a resident of the locality, said it is a problem that recurs twice or thrice every year.

“The road is inundated by drainage and sewage water. Ranchi Municipal Corporation is aware of this problem but the municipal authority never showed interest for permanent solution of the problem. I informed RMC officials and they once visited the locality and returned without giving any solution. Ranchi’s civic guardians apparently have always been immune to such criticism,” Jha said.

Sources in the civic body said the RMC employee and his family members own the 10-cottah vacant plot which is used as the discharge area of the drainage, and they have blocked the discharge.

“In the last two months, we received around two dozen complaints from local residents who said that some unknown person choked the drainage. Every time we cleaned it, the next day the drainage was found choked again,” said an RMC employee who pleaded anonymity.

Residents are being forced to stay indoors due to the overflowing drain.

“We are living in a hell with foul smells, insects and reptiles all around,” said Shiv Kant Mishra (75), a pediatrician whose house is situated next to the vacant plot.

“I can’t even go out of my house as my premises are flooded. The drain water has polluted my well. Parents face problem to visit my home,” added Mishra, who on average treats 40 children at his home clinic.

Raman Kumar, assistant to gynaecologist Sunita Jha who runs her private nursing home in the colony, said patients are not coming these days and they take medical advice over phone.

“The road is narrow and full of potholes and flooded so it is risky for pregnant women to visit the nursing home. This is one of the busiest roads of the colony, but unfortunately the RMC doesn’t care for basic civic amenities,” said Kumar.

Residents fear the worst is yet to come; schools are due to open next week after summer vacations. Vidyapatinagar Col-ony has a population over 10,000. Gandhinagar has four schools including DAV, and health centres such as CCL Hospital.

Most of the children of the locality study at these schools.

“My two daughters study at DAV school. I am worried how they will go to school,” said homemaker Sabita Mishra. “They will have to travel an additional kilometre. For the past 10 days me along with my children and husband have been living with my parents at Boreya.”

Around three years ago, the civic body had sanctioned Rs 36 lakh to extend the drainage pipe to Gandhinagar. However, work was stopped midway. The RMC reasoned that it would be an unnecessary expenditure since the mega drainage and sewerage project for Ranchi under the JNNURM (Jawaharlal Nehru National Urban Renewal Mission) has already been kicked off including at ward number 2.

“Do we suffer till our locality is covered under JNNURM? This project is already running late,” said resident and shopkeeper Bapi Chatterjee.

“My business has suffered. We are always neglected by RMC.”

Contacted, Ranchi deputy mayor Sanjeev Vijayvargiya said: “I personally called the land owner, who is an RMC employee, to allow his land as outfall but he gave cold response. Last year we decided to extend and connect the drainage with that of Gandhinagar. But the authorities of Central Coalfields Limited denied permission. We are trying to find an alternative.”

Homemaker Anita Jha said the locality would hold meeting within a couple of days “to decide whether to pay tax to the RMC”.

She added: “We the housewives have been facing problems. During the Assembly election we will surely teach the government a lesson.”