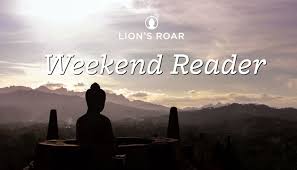 Last summer, I attended the International Buddhist Conclave in India and had the opportunity to sit under the Bodhi tree, where it’s believed Siddhartha Gautama, the historical Buddha, was sitting when he reached enlightenment. Generation after generation of Buddhists have gathered to practice in this spot, and when I joined them and listened to the chorus of birds in the branches above me, I discovered a new appreciation for lineage and the precious relationship between teacher and student. My practice was enriched.

As the dharma teacher and pilgrimage guide Shantum Seth put it, “That tree has a characteristic chime sound when the wind blows through, and it calms your mind. There are experiential things that you can only do while you’re there.”

Of course, you can gain realization under any tree in your very own yard or local park. “But sometimes,” Seth continued, “you have to go to the Bodhi tree once or twice to realize that the maple tree at home is your tree of awakening.”

In addition to the Bodhi tree, I journeyed to several other Buddhist pilgrimage sites in India. I wrote the three stories in this Weekend Reader about that trip. In “The Buddha Was Here”, I go to places associated with the life of Siddhartha Gautama and explore what it means that he was actually a living, breathing human being. In “The Dharma Was Built on These Bricks” and “Only Nirvana Is More Beautiful” I visit magnificent ancient ruins that offer a window into how Buddhism took root and began to flourish. Perhaps these stories will inspire you to take a trip of your own.