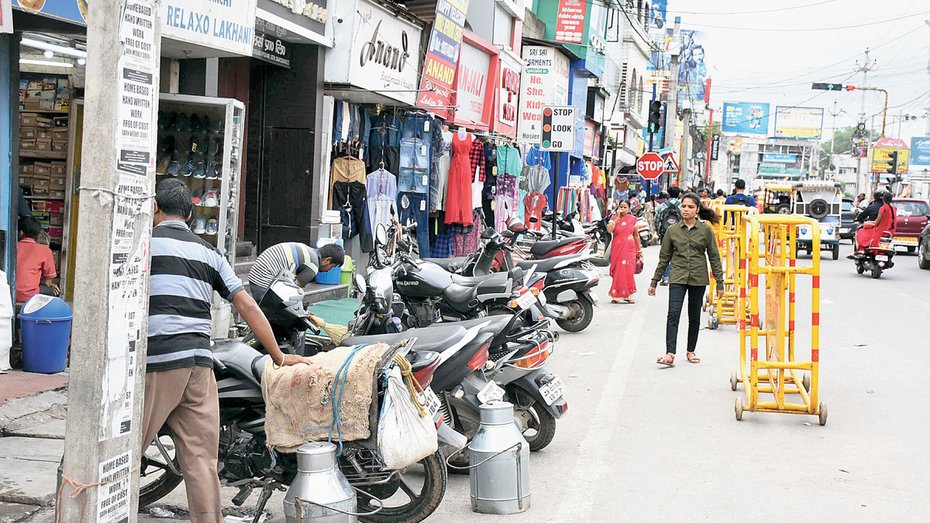 pring posts with iron and plastic chains will be used along the footpath area on the Ranchi Main Road to prevent illegal parking and give pedestrians space to walk.

Ranchi Municipal Corporation (RMC) and city traffic police have jointly decided to install spring posts — road safety products that bend when hit and bounce back, preventing vehicles from damage — fitted with iron and plastic chains along the footpath area.

“We have procured most of the spring posts along with iron and plastic chains and their installation would be done in a couple of months. This, we hope, will prevent illegal parking of bikes and other vehicles on spaces reserved for pedestrians,” said Ranchi traffic SP Ajit Peter Dungdung.

A dedicated footpath is sorely needed along the capital’s artery. According to a survey by the Institute for Transportation and Development Policy (an NGO focusing on rapid mass transit system in cities), Ranchi Main Road during peak hours has over 3,300 pedestrians walking and 572 vehicles crossing it every hour.

RMC had last week demarcated a 4-metre wide area along the 400-metre stretch between Albert Ekka Chowk and Sarjana Chowk on Main Road for pedestrians on a trial basis, marking the area with white line. The RMC installed sliding road barriers. But the two-wheelers managed to squeeze into the gaps of the sliding barriers and parked their vehicles on the dedicated footpath causing inconvenience to pedestrians.

“The road has been divided into two, with 6 metres left for vehicles and 4 metres for walkers. By and large, vehicle-owners have cooperated but at some points manual rickshaws and bikes do cross (the white line) and tend to park illegally, admitted RMC city manager (transport), Saurav Verma. “However, the police have completed tender for the spring posts and chains and we will soon start installing them. After that, it would be very difficult to park vehicles on the dedicated footpath,” Verma added.

The spring posts would be placed at a gap of every metre and chain links tied on the top of the posts along the entire stretch of the nearly 3km Main Road.

“Vehicles should be parked on the 12 dedicated parking bays and not along the footpath at any cost. Violators will be prosecuted by the RMC and police,” Saurav added.

In July, the flanks of the Main Road were cleared of vendors who were allotted shops at Atal Smriti vendor market in Kutchery Road. But, the place left vacant by them immediately started being used as illegal parking spots. That’s when RMC and police decided to make them into dedicated footpaths.