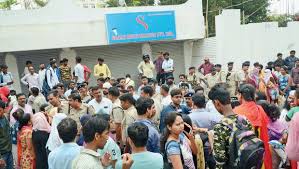 Rround 20,000 students and homemakers of the capital have been allegedly cheated by scamsters running a fake survey agency, Smoak Multi Project Pvt Ltd, for the past six months at Sharma Lane on Main Road under Hindpiri police station.

On Tuesday, some 2,000 persons, mostly homemakers and students, held a protest in front of the closed office building and tried to ransack it despite the presence of the police.

The mastermind, identified so far by only his first name Ankit, is said to be from either Muzaffarpur or Nalanda district of Bihar, said police. Ankit also hired local youths to run the office. All are absconding.

Ranchi police have lodged an FIR against Ankit under Sections 406 (criminal breach of trust) and 420 (cheating) of IPC.

A policeman explained the scam was not a fake chit fund, but a survey with an elaborate modus operandi to give it respectability. “People were not asked to deposit their money as savings. People were lured by the promise of easy money,” he said.

Explaining the process, the policeman said: “Prime suspect Ankit convinced youths that they were conducting a national survey to prepare books for visually impaired people. Advertisements were placed in newspapers and pamphlets distributed outside schools and colleges. Interested people were asked to sign an agreement with the company with Rs 1,950 as refundable registration fee. Fake stamp papers were used for the agreement.”

Then, the surveyors were given booklets with numerical codes and words and 150 survey sheets each.

“They were told that if they completed 150 survey sheets in a week they would get Rs 3,000. If they brought in more people, they would get Rs 500 more per entrant. Homemakers and students, who wanted extra income or pocket money, fell for this in large numbers,” the policeman added.

DSP (Kotwali) Ajit Kumar Bimal said Ankit might not even be the mastermind’s real name, admitting that they had precious little to go with. “We will question the shop-owner who rented out his premises to Ankit. We have procured some documents from students and mobile numbers used by the accused. I will also probe into what action local police took when a citizen had raised an alarm last month,” he said.

The citizen concerned, Md Javed, who is the president of a watchdog outfit, non-banking agents and investors protection committee, squarely blamed the police for this present mess.

“On July 29, I gave a written complaint at Hindpiri police station. I had submitted evidence how Smoak Multi Project is committing scam and money laundering. Police did come to the office when Ankit was present. But the police did not trust me. They said action can’t be taken unless the victims lodge an FIR.” Javed said.

Victims were both dejected and furious. Kajal, a student of St Xavier’s College, said her friend trapped her into this. “I can’t face my family that I am such a big idiot. My father is a policeman. He will thrash me if he comes to know that his daughter was conned. I prepared at least 500 survey sheets,” she said.

Riya Singh, a student of St Anne’s College, said she knew something was fishy when she did not “get a paisa”. “We’ve been fooled.” Anukriti, from St Xavier’s College, lamented that she not only lost money but also wasted her valuable time.

“My family members did not even know. I thought I’d earn some pocket money and surprise them. I wasted my valuable time that I could have used for my studies,” she said.

Ruqshar Perwez, a teacher at a private school, said the tuition teacher of her children told her about the scheme. “I thought, why not. And now, I’ve lost my money,” she said.

Faizal Ahmed, owner of a computer store, alleged Ankit and his team ran away with eight computers that he (Ahmed) had rented out to the company.