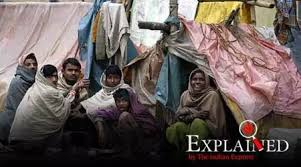 LAST WEEK, the UN Development Programme and the Oxford Poverty and Human Development Initiative released the global Multidimensional Poverty Index (MPI) report for 2019, which found that Jharkhand has made the fastest improvement among Indian states in reducing poverty (The Indian Express, July 13). Across India, the number of people living in multidimensional poverty has gone down from 690.55 million in 2005-06 to 369.55 million in 2015-16 — a reduction of 271 million people in a decade.

Jharkhand reduced the incidence of multidimensional poverty from 74.9 per cent to 46.5 per cent between 2005-06 and 2015-16. The accompanying graph shows how its index, second only to Bihar’s in 2005-06, has shown the steepest decline among the poorest states. Jharkhand, however, remains one of the poorest states in the country. Bihar, Jharkhand, Uttar Pradesh, and Madhya Pradesh together accounted for 196 million MPI poor people — more than half of all multidimensionally poor in India.

The global MPI factors in a person’s deprivations across 10 indicators in health, education, and standard of living — nutrition, child mortality, years of schooling, school attendance; access to cooking fuel, sanitation, drinking water; electricity and housing; and assets. For India, the MPI has reduced from 0.283 to 0.123 in a decade. Of 10 selected countries, India and Cambodia reduced their MPI values the fastest. While the proportion of the population living in multidimensional poverty in India has halved from 55.1 per cent to 27.9 per cent in a decade, the intensity of deprivation has fallen less sharply, from 51.1 per cent to 43.9 per cent, the report said.