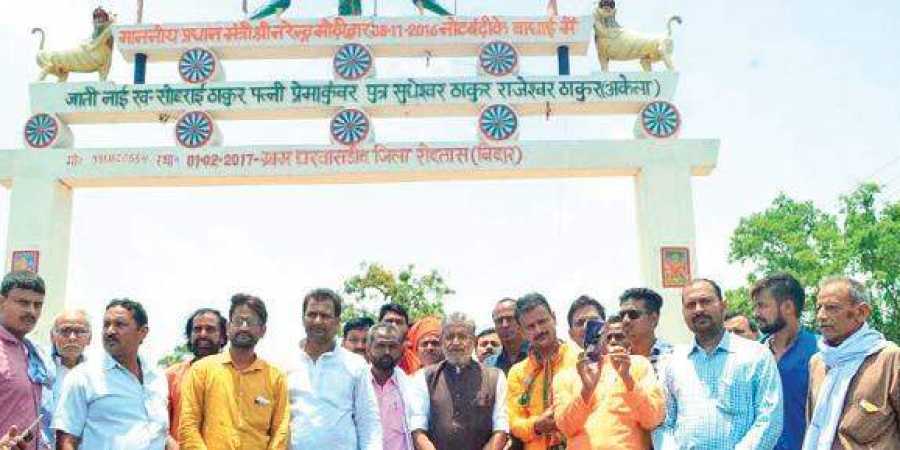 Gate dedicated to demonetisation in Bihar

To symbolise his “unflinching support to demonetisation”, a daily wage labourer has erected a Badhai Gate (congratulatory gate) in the Rohtas district of Bihar. Enthused and encouraged by PM Narendra Modi’s 2016 move, Rajeshwar Thakur (45) of Gharbahdih village built the gate with his own money and donations received from his neighbours in over a year. Thakur said the gate will be inaugurated soon by Bihar’s deputy CM Sushil Kumar Modi, who had recently visited it during his tour in Rohtas.

Starting from June 10, Kissan Chaupals or farmers’ meets will be organised in Bihar’s 8,405 panchayats in 534 blocks. The state agriculture department has come up with the idea to apprise the farmers of various agriculture schemes launched by the state and the central government. State agriculture minister Prem Kumar said at least 250 farmers besides agriculture officials, including the panchayat Kissan Salahakars (farmers’ advisors), will be involved in the exercise. Details of schemes and subsidies will be made available to the farmers at the chaupal, he added.  It also helps revive the tradition of choupals existing in the ancient times to help farms solve their problems on their own at their place.

Deputy CM Sushil Kumar Modi has directed the Bihar State Pollution Control Board to set up eight new air quality monitoring units in Patna, Gaya, Muzaffarpur, Bhagalpur and Darbhanga under the National Clean Air Programme. Modi, who holds the portfolio of environment, forest and climate change ministry in the state, said the four units will be set up in Patna and one in each of the other cities at the estimated cost of D16.96 crore. The Centre has already provided D10 crore for it.

The Bihar State Road Transport Corporation has introduced Chalo Common Mobility pre-paid travel cards for the residents of Patna. Department secretary Sanjay Kumar Aggarwal said the cards can be recharged by any city bus conductor from D10 to D3,000. The card can be used to pay the fare by swapping it onboard any of the 110 city buses plying on 14 routes.  Daily commuters, especially students, in the city can use it as a monthly smart bus pass.