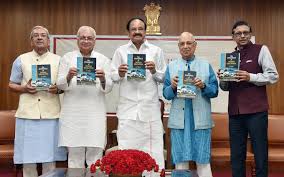 New Delhi: Expressing concern over India’s slide from the heights of Nalanda and Takshasila to not being among the world’s top 100 educational institutions now, the Vice President of India and Chairman of Rajya Sabha, Shri M. Venkaiah Naidu has said that the New Educational Policy will make India a global educational hub. He urged the public to give their views and suggestions on the draft NEP by the stipulated time of 15th of this month.

Shri Naidu further called for a holistic and value-based education that will lay strong foundations for the vibrant economy that India is emerging as. He spoke on the challenges to Indian education after releasing a book ‘The Dynamics of Indian Education’ authored by Prof. J.S. Rajput at the Vice President’s residence, here today.

The Vice President said; “These are the critical times for the country and there is a need for having a fresh look at the education system. I have been consistently advocating the need for revamping the education system to not only make our universities world-class, but to make India the knowledge hub. I am glad that the draft of the New Education Policy makes several out of the box suggestions that have the potential to turn India into a global education hub.”

Shri Naidu stressed that primary education shall be in the mother tongue which enables learning other languages effectively at later stages. Highlighting the knowledge traditions of India, he referred to several German Universities promoting Sanskrit to decipher ancient palm leaves and scriptures for clues for scientific innovation.

Former Union Minister Shri Arif Mohammad Khan who spoke on the occasion said that the land of India for ages is marked by the tradition of knowledge and wisdom. He referred to Prophet Mohammad as having said; “Sitting in Mecca, I am feeling the cool breeze of Knowledge from India. I am an Arab without Arabness; I am not an Indian but feel the Indianness.”

Following is the text of Vice President’s address:

“I am immensely pleased to release the book “The Dynamics of Indian Education” written by well-known educationist, Prof Rajput.

The book covers a whole gamut of issues relating to Indian education system and I must compliment the author for this timely work on a topic that is very close to my heart.

As we all are aware, India has a rich history, tradition and culture of education system from Vedic times. The Gurukul system of imparting knowledge and skills used to focus on holistic development of individuals. Education of women was also accorded huge importance during ancient times and there were well-known women scholars during the Vedic period.

In fact, India was once known as Vishwaguru because of its world class centres of learning like Takshashila, Pushpagiri, Nalanda and others. It was stated that around 10,000 students, including many from foreign shores used to study diverse subjects at Takshashila.

India contributed not only in philosophy and spirituality, but in sciences, mathematics, astronomy and other areas. The objective was “welfare of one and all – Sarva Bhut Hite Ratah”

Subsequently, following foreign invasions and the colonial rule, India lost its pre-eminent position. Today, one finds that not a single Indian university figures in the top-ranking global educational institutions.

These are the critical times for the country and there is a need for having a fresh look at the education system. I have been consistently advocating the need for revamping the education system to not only make our universities world class, but to make India the knowledge and innovation hub.

We need to recapture the past glory. Our education system must remain deeply rooted to culture, while simultaneously steadfastly pursuing new frontiers of knowledge.

Undoubtedly, our post-Independence achievements in education are praiseworthy. We have near total enrolment in schools in spite of over-threefold increase in population!

The recent launch of Chandrayaan -2 and other remarkable achievements in space sciences have unveiled before the world the Indian tradition for the quest of knowledge. It inspires and motivates young Indians and our scientists deserve all the praise for making us proud. Elsewhere, Indians working at NASA and Silicon Valley have made the country proud with their contributions.

I feel that the need of the hour is to provide quality education at all levels to all people. I am glad that the draft of the New Education Policy makes several out-of-box suggestions that have the potential to turn India into a Global education Hub. With the draft report placed for another round of receiving inputs, I hope that many more suggestions would come forth to make Indian universities achieve their rightful place in the global rankings.

I must however, mention that in our march towards a knowledge society, we need to strengthen our school education on priority basis. In particular, special attention has to be bestowed to improve government schools.

We must reform the education system to do away with rote learning. We need to promote concept learning, critical thinking, creativity, problem solving skills as also multilingualism and digital literacy to enable the students to confidently face challenges and successfully pursue their careers.

I need not once again enumerate the importance of teaching in mother tongue from a young age. In fact, I have consistently been advocating the need to make it mandatory for mother tongue to be the medium of instruction up to primary level.

I am told that some of the top universities in Germany teach Sanskrit to enable the scholars of the subject decipher ancient palm leafs and scriptures and find clues for scientific innovation. We should not neglect Sanskrit. I feel that no language should be imposed, nor any language opposed.

Teachers are the pivot of national educational endeavors. We need best of the minds in teaching profession. Once in the profession they need to internalize “yavadjeevait adhiyate viprah” – the wise continue to gain knowledge throughout life.

Teachers should be torchbearers of the society. I am told that there are around 1 crore teachers and 30 crore students from KG to PG level in the country. Filling up all the vacant positions of teachers is equally important to make our education effective.

Teachers play the most crucial role in shaping the character of a child after his or her parents. Therefore, teachers should have societal concerns. We must develop a model of education that reflects Indian culture and ethos. We need to inculcate cultural, moral, ethical and spiritual values among children.

I hope the new educational policy will address various concerns on reforming the system and fulfill the need for India-centric education architecture. The draft policy should be studied with an open mind. People should give constructive suggestions rather than criticize it for the sake of criticism.

We need education for progress and development. Probably more than that, we need Education for Character Development. Value based education that prepares the young for an India that abounds in ‘social cohesion and religious amity’ is our goal.

The book practically covers all the aspects mentioned by me. Prof. Rajput strongly pleads for value education, character formation and celebration of unity in diversity. I wish him well in his efforts.