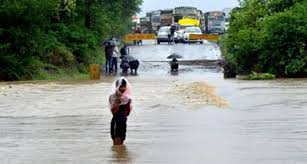 In Bihar, moderate to heavy rainfall occurred in western and eastern parts of the state in past 24 hours.

Due to incessant rainfall in the catchment area of Nepal originating rivers for the last four days, Gandak, Bagmati and Budhi Gandak and their tributaries are swollen.

Evacuation drive has been started in West Champaran from low-lying and riverine area of Gandak to shift people to safer places.

East Champaran and Muzaffarpur. Traffic has been disrupted due to water-logging of Bagmati and Lalbakeya river on Sheohar-Motihari road.

Extra vigil is being maintained on barrages, embankment and riverine area of Gandak, Budhi Gandak and Bagmati by engineers of water resource department.

Flood relief & rescue teams have been put on standby by the Disaster Management Department.

According to the Chief of Disaster Management Cell Vivekananda Kadam, a major portion of a bridge on a small river at Morchundi village washed away this morning. While no casualty has been reported, incidents of rainwater gushing inside villagers’ homes have come to light.