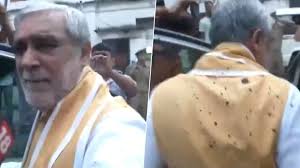 Patna: A bottle full of ink was flung here on Tuesday towards Union Minister of State for Health Ashwini Kumar Choubey, who ended up with stains on his clothes while his vehicle got smudged with the dark blue liquid.

The drama unfolded outside the Patna Medical College and Hospital which Choubey had visited to inspect the ward where patients suffering from dengue, incidence of which has witnessed a spurt in the past fortnight, were admitted.

The minister, who is known to prefer taking the front seat adjacent to that of the driver, had opened the door and was about to board when the uncorked bottle came across flying and crashed a few feet away from him.

Spots of the ink could be seen on the ministers kurta sleeves and his sleeveless jacket while the cars bonnet and window panes were covered with blotches. Hospital authorities and officials who had come out to see the minister off exclaimed in horror while the personnel deputed for his security gave the suspected miscreants, one of them donning a blue T-shirt and jeans and the other dressed in a formal full-sleeve shirt and trousers, a chase for some distance.

A visibly irritated Choubey told a posse of journalists before speeding away “it has been orchestrated by elements who do not believe in democracy, who led a life of crime before entering politics”.

Although the minister took no names, his barb was apparently aimed at controversial politician Rajesh Ranjan alias Pappu Yadav, who has floated his own outfit Jan Adhikar Party (JAP).

Several people, claiming to owe allegiance to JAP, had raised slogans against Choubey when he had arrived at the PMCH in the morning.

Yadav had made his presence felt in the state capital during the recent waterlogging when he was seen moving through the inundated streets atop motor boats, distributing food, drinking water and money among residents.

On a local news channel, a man in his 20s appeared dressed in a blue T-shirt claiming that he indeed was the one who had thrown ink at the minister.

He said he did so as an expression of “personal anguish” over the failure of governments in the state as well as the Centre to help the people of the city whose lives had come to a grinding halt on account of streets remaining submerged in waist-deep water for several days together.

He also said his name was Nishant Jha and although he acted in his “personal capacity”, he was an active member of the students wing of JAP.

However, when Yadav was contacted and told about Jha, he remained evasive about the young mans connection with his party.

“I do not condone such acts. But did the honourable minister expect bouquets? A few drops of ink on his clothes has got his goat.

“He should try putting himself in the shoes of those whose homes and shops were destroyed in water logging and who are still not able to live in peace, thanks to the outbreak of vector-borne diseases that the deluge has brought in its wake”, Yadav told reporters.

Later, after concluding a meeting with state health officials besides central medical experts who have been camping here to assist the former, Choubey denounced the episode as “a cowardly act”.

He said “if people are so desirous of expressing anguish, they should do so in my face, without hiding behind a crowd and scurrying away immediately afterwards”.

Meanwhile, no FIR was registered in connection with the incident which took place several hours ago and Pir Bahore police station SHO- Rizwan Ahmed Khan- said “we are awaiting a complaint to be lodged on behalf of the aggrieved party”.

A close aide of Choubey said on condition of anonymity the minister has left for Samastipur where he has been requested by LJP chief Ram Vilas Paswan to campaign in favour of his nephew and party candidate Prince in the Lok Sabha by-election.

“We, wonder why the police cannot act taking suo motu cognizance of an incident that has taken place at a public place, caught on camera and involves a Union minister,” the minister’s aide said.