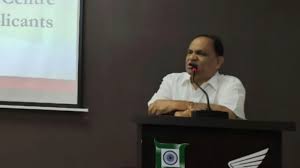 The Jharkhand government has dropped an indication to revise the fine provision in the new Motor Vehicles Act.

State Transport Minister CP Singh said that the traffic fines imposed were exorbitant. He said that the government was for the people and they felt that the fines were harsh.

The transport minister said that the government was serious about giving relief to the commuters who are facing the brunt of new act.

CP Singh assured the people to wait for two days after which PM Modi will be there and then a special session would be convened regarding the matter.

“I have felt the difficulties of people. The act was implemented abruptly and all of a sudden,” CP Singh said.

The govt has decided to relax the norms and fine provision in the new Motor Vehicles Act.

He said that the fines slapped under the head of registration, pollution and other offences would be reviewed. He also said that he had already talked to the chief minister about it.

When asked why all the states who were heading towards elections were in a haste to revise the traffic fines, CP Singh said, “We are concerned about people’s interest.”

It comes after Gujarat slashed the hefty fines by nearly 50 per cent after the implementation of the Motor Vehicles Act. Karnataka is likely to follow Gujarat in reducing traffic fines.

Speculations are rife that the government is scared that such hefty fine could cost them during the elections which are round the corner. Jharkhand is scheduled to go for elections towards the end of the year.

Earlier, CP Singh was fined for violating the traffic movement tracking system he had introduced once. The minister was on his way on June 23 when his car was caught jumping a signal at the Sarjana Chowk in Ranchi by the red light violation detection system (RLVD). The minister had to shell out Rs 100 as penalty.