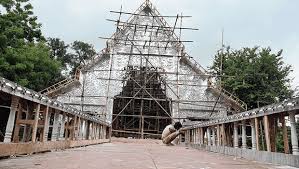 Deepak Jana belongs to a family of farmers in Contai of Bengal’s East Midnapore district but he is more interested in working as a pandal decorator because it pays the 30-year-old more than what he earns from farming and also gives him the pleasure of being an ace craftsman.

Most artisans from East and West Midnapore earn Rs 300 to Rs 400 per eight hours of work in giving shape to Durga Puja pandals in Jamshedpur and other parts of Jharkhand, Odisha and Bihar. More than 2,000 workers from the two Bengal districts come to the steel city during the festive season.

According to members of Jamshedpur Durga Puja Kendriya Samiti, there are about 50 big-budget Puja committees known for spending huge amounts on pandal decoration. In the steel city, almost all high-budget, well-known pandals are made by Midnapore-based tent houses and decorators; most of them are farmers who swap their profession in search of creative satisfaction and some quick money in the festive season. Competition among the committees has led for demand for the best decorators from the twin districts, considered hubs of decorators in general and pandal makers in particular.

“Most of the workers who come work under contractors are farmers,” said Deepak, who has done the pandal for Central Sarbajanin Durga Puja in Sonari as a part of Basanti Decorators from Contai. “My family grows vegetables and pulses in Contai but I travel for pandal making because it is good money and also I love the creative part. Once the deal is finalised between the puja committee and the decorator, they hire us for the work. I went to Odisha last year. I think what committees like is the skill that we possess but that comes with practice.”

Sabyasachi Jana, the concept designer of Parbati Decorators from Mecheda, East Midnapore, is the lead designer of the Durga Puja of the Jairam Youth Sporting Club in Adityapur that has this year showcased how manmade pollution is the cause of humankind’s own devastation. The Telegraph had reported on Friday how the pandal has attracted eyeballs and criticism in equal measure because it is made up of a million plastic bags.

“We have over 1,200 tent houses in East Midnapore only who are always busy in work across the eastern part of the country,” Sabyasachi said. “Most of the workers are farmers but due to low income, a huge number of people have turned to this profession which makes you skilled and gives you easy money in a couple of months.”

Most pandal decorators have teams that include masons, carpenters, electricians and painters to take care of various facets of pandal making such as building the structure, covering it with cloth, artwork, painting, and lighting. Most pandal makers are self-taught or learn the skills by working as apprentices for others.

But why not Jharkhand-based decorators?

“There are a couple of reasons,” said Arun Singh, secretary of Jamshedpur Durga Puja Kendriya Samiti. “First, you don’t find craftsmen of that calibre in Jharkhand. Second, we have found a lack of professionalism here and thus committees have to depend on an alternative way which is better even if it is some times expensive. This is not just the case of decorators but also with dhakis who come from Bengal.”

There is some work that does go to local decorators. For instance, the Utkal Durga Puja Committee in Kadma, which has India’s Moon mission as its theme, divided the work between a local decorator and one from Contai.

“The primary ply work was done by 20 craftsmen from Contai because they are the ones who can do it best,” said Siphon Mohanty, vice president of Utkal Durga Puja Committee, Kadma. “They are skilled and are known for their work. It is not only Jamshedpur but these decorators from Midnapore cater to the entire Jharkhand, Bihar and Odisha too. Some even go to Calcutta because of their work.”