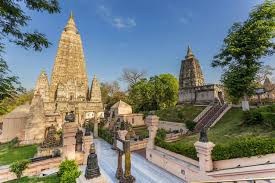 Mahabodhi Temple Complex at Bodh Gaya is a pertinent pilgrimage site for the Buddhists and for all the followers of Gautam Buddha. A remarkable prince and sage, Buddha toiled throughout his life to spiritually uplift as many people as he could. Although there are a few places related to his life journey, the Mahabodhi Temple Complex is a special site. It was constructed at the behest of Emperor Asoka in the 3rd century, and later, it was renovated and expanded by the kings of the Gupta dynasty.

The temple is one of the most prominent temples in India. The significant events that occurred on its timeline are as under:

531 BC – Buddha attained the perfect state of enlightenment while being seated in meditation under a Bodhi tree at the site of Mahabodhi Temple Complex.

260 BC – Emperor Asoka visited the site of Bodhi tree to worship it, and made the first temple for honouring Gautam Buddha.

Gautam Buddha attainted enlightenment or nirvana and spent a span of seven weeks after that across various spots where the Mahabodhi Temple stands today. From battling the inner and external demons during his meditation to fiercely resisting the various temptations that came his way, Buddha covered great milestones in his inner sacred journey at different parts of the Mahabodhi temple. Ahead, we throw some light on the seven weeks he spent post nirvana.

The Bodhi Tree is the most illustrious site situated to the west of the main temple. It is believed to the direct descendant of the Bodhi Tree underneath which the Buddha stayed for the first week after attaining enlightenment.

Buddha spent his second week at the prayer hall, also known as Animeshlochan Chaitya. It can be found towards the north of the central path on a raised platform.

This jewelled ambulatory is also called Ratnachakrama. It is famous for being the site where the Buddha spent the third week of his internal journey walking eighteen steps back and forward. It is located near the north wall of the main temple.

Located towards the north-east near the enclosure, Ratnaghar Chaitya is the place where the Buddha spent his fourth week.

During his fifth week, the Buddha was meditating under Ajapala Nigrodh Tree and answered the questions posed by the Brahmins.

The sixth week was spent by Gautam Buddha at the Lotus pond situated outside the enclosure to the south of the temple complex.

Buddha was here during his seventh week of meditation. A tree has been planted to mark this site. It is located towards the south-east of the temple.

The Main Temple at the Mahabodhi Temple Complex at Bodh Gaya is a masterpiece that showcases the best of Buddhism architectural creativity. Whether you are a Buddhist or not, you will find this place interesting to visit. So visit it and be blessed with one of the most sacred religious places in India.