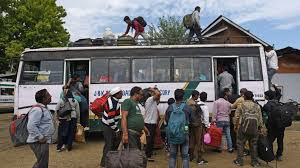 Source:-hindustantimes.com
Bodh Gaya and Mahabodhi Mahavihar have been in the hit list of the JMB and the terror group is said to have made at least three attempts to pull off attacks.

The Bihar and West bengal police departments have been robbed of their sleep, ahead of the fortnight-long Pitripaksh Mela beginning on September 12, as they recovered huge quantities of ammonium nitrate, timers, gelatins and wires from the rooms taken on rent in the city by terror suspects owing allegiance to Bangladesh’s Jamat-Ul-Mujahideen (JMB). Deputy superintendent of police Ghuran Mandal said electronic devices and explosives seized during raids on Friday indicated a major terror plot.

Bodh Gaya and Mahabodhi Mahavihar have been in the hit list of the JMB and the terror group is said to have made at least three attempts to pull off attacks. Ajaz Ahmad, the suspected India head of the Bangladesh-based terror outfit who was arrested from Gaya five days ago in a joint operation by West Bengal and Bihar police, has reportedly told interrogators about plans to stage terror attacks during religious congregations in Gaya and Bodh Gaya.

Ajaj is a suspect in Bodh Gaya serial blasts. Following Ahmad’s arrest, sleuths have been raiding suspected hideouts of terror suspects to bust sleeper cells in Bihar and Jharkhand.

Pitripaksh Mela is scheduled to be inaugurated by the chief minister on September 12. The Gaya police and the district administration have resolved to install CCTVs at key points to keep a watch. Door frame metal detectors are being installed at entry gates of the Vishnupad shrine, where every pilgrim will be scanned before entering the shrine.

Over 10 lakh pilgrims arrive here during the fortnight mela to perform rituals for the salvation of their ancestors’ souls.