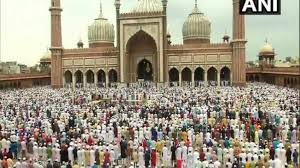 Security has been beefed-up across Bihar in the view of Eid-ul-Adha, also called Bakrid, coinciding with the last Monday of Shravan month, when devotees visit temples of Lord Shiva in large numbers, a senior police officer said.

“One company of Rapid Action Force and Sashastra Seema Bal have been stationed at Patna and Bhagalpur respectively to assist the local police in maintaining law and order in case any disturbance is reported,” Additional Director General of Police, Headquarters, Jeetendra Kumar told reporters.

The security beef-up comes after Chief Minister Nitish Kumar, at a high-level meeting last week, asked officials to maintain law and order during the two festivals and lay emphasis on preventing rumour-mongering through social media.

DGP Gupteshwar Pandey, who was present at the meeting, has appealed the public through the social media to remain vigilant against attempts to disrupt peace during the festivals and warned of stern action against rumour mongers.

In his message on Eid-ul-Adha eve, the Chief Minister urged the people of the state to remember that “the festival symbolises sacrifice and its true joy can be found only in an atmosphere of peace, amity and brotherhood”.

Meanwhile, four teams of National Disaster Response Force (NDRF) have been dispatched from here to neighbouring Jharkhand’s Baidyanath and Basukinath temples to prevent any untoward incident during the massive turnout of devotees there on the last Monday of Shravan.

NDRF’s Patna-headquartered ninth battalion commandant Vijay Sinha said,”Devotees visit the shrines after taking bath in the nearby ponds. Our personnel will be vigilant there with rescue boats to avert any untoward incident”.

Unprecedented security has been deployed at Patna’s famous Beur Jail since late Wednesday night after the Intelligence Bureau (IB) alerted the Bihar police about a possible jailbreak attempt by Maoists and terrorists, much like the 2005 Jehanabad jail break incident.

Police said at least 80 jawans of Bihar Military Police (BMP) and other personnel have additionally been deployed at the jail.

In November 2005, hundreds of Maoists had stormed the Jehanabad jail and freed several of their top leaders. In all, 341 prisoners fled in that incident.

Officials said the search operations led to recovery of several cell phones and few other items not permitted inside the jail.

As per the IB alert, the accused in the Bodh Gaya and Gandhi Maidan terror blasts, along with other criminals lodged inside the jail, had planned to carry out a repeat of the Jehanabad incident or a major blast.

After inspecting the jail, the DGP instructed officials to intensify patrolling in the area. “We raided several wards and recovered some cell phones. We are alert and ready to tackle any eventuality,” he said.

DIG (central range, Patna), Rajesh Kumar, however, preferred to downplay the jailbreak threat. “We are carrying out routine raids and reviewing the security in the wake of attack on a constable at Danapur court by an undertrial prisoner recently. The objective to prevent repeat of such incidents,” he said.

Jail officials said that the accused in Bodh Gaya and Gandhi Maidan blasts lodged inside Beur jail had in October 2017 clashed with the jail security personnel and also raised anti-national slogans. Among other things, they had decried the quality of food served to them. Since then, they have been confined to their cells and not allowed to meet with others.