With the Centre revoking Article 370 which gave special status to J&K, the Kashmir Valley is once again in focus. But Yusuf Shah Chak. the last independent Muslim ruler of the Valley, has remained obscured and unknown for a long time.

Chak is buried in Nalanda and his tomb is in disrepair and unprotected.

Chak was exiled to Bihar by the Mughal emperor Akbar. The area where he had settled along with his family and relatives in Biswak village in Nalanda and also maintained a cavalry force of 500 horses, was later known as Kashmiri Chak. Though the exiled Kashmiri ruler died in Odisha in 1592, his body was brought to Bihar and has been lying buried along with the tombs of his wife, sons and other relatives at the graveyard at Biswak near Kashmiri Chak.

Though his Mazaar is encircled with boundary wall, the land outside this wall at the cemetery is open and has remained prone to encroachments in the past. Some concrete structures and thatched roof hutments too have come up around its periphery.

Earlier, some locals erected a boundary wall around his Mazaar, but the entire area of the cemetery outside this wall is open to encroachment.

Recently, Yasir Iqbal, a descendant of the Chak ruler’s relative, wrote a letter to the Minority Welfare Department, Bihar, drawing the attention towards the increasing threats of encroachments at the site of the cemetery .

He has made an appeal to take steps to stop encroachment and has also requested for the boundary wall at the cemetery. In the letter, Iqbal also made requests to preserve this piece of history and to take initiatives to tap tourism potential of the site.

The site has a great tourism potential and it can be tapped. “But it’s the domain of the tourism department. They should take initiatives in this direction and should develop it,” he said.

Yasir Iqbal said many Kashmiris have been eager to come here to pay tribute to their last ruler. “Many intellectuals have also been coming here, but the place lack even basic infrastructure. Even the road to Kashmiri Chak village was developed in 1977 when Sheikh Abdulla, the prominent leader of Kashmir had arrived to witness Yusuf Shah’s tomb” he said. There is also no place at the village to stay. “You have to find the accommodation whether at Islampur or at Rajgir,” he said.

However, the biggest concern has been encroachment of the land. “The cemetery is spread over five acre land area at Biswak and over one acre land at Kashmiri Chak. But the tombs of Yusuf Shah, his wife and sons for decades remained unknown. There was almost a jungle around it and the tombs were hardly visible. Then we got it constructed a few years ago. But the area outside is still open and is being encroached inch by inch. Some concrete structures and thatched roof hutments have also come up on its border areas,” he said.

Yusuf Shah Chak ruled Kashmir from 1579 to 1586. In 1579 he was deceitfully imprisoned by the Mughal emperor Akbar, but was later released and was exiled to Biswak area of Bihar.

“He had a Mansabdaari of 500 horses. In fact, his love and knowledge of art and literature had impressed Mughal Badshaah and that became the reason for his release. He had married Habba Khatoon, the legendary poetess whose verses are still sung by the locals in Kashmir,” he said. 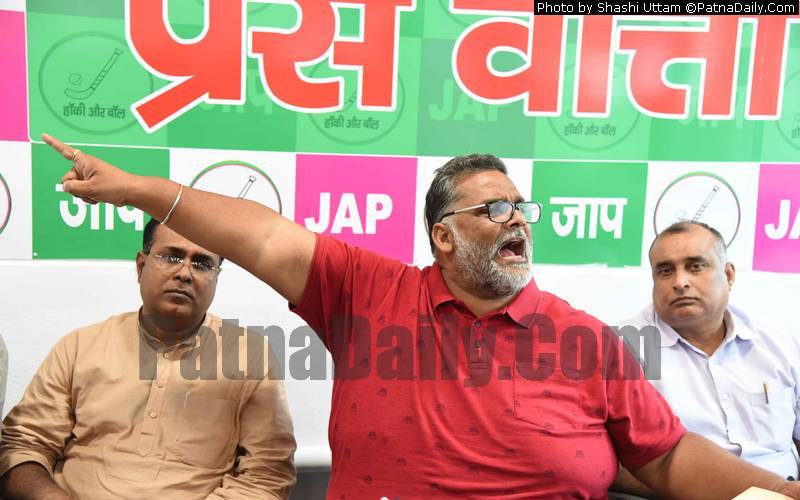 Patna: While the majority of Bihar, along with the nation, was celebrating the cancellation of Article 370 and Article 35A in Jammu & Kashmir, non-NDA parties, and Janata Dal – U which is part of the BJP-led NDA in Bihar, slammed the Modi government for its unilateral policy and ‘murdering democracy’ in India.

Former MP Pappu Yadav, the leader of Jan Adhikar Party (JAP), at a press conference in Patna on Monday, slammed the Modi-Shah duo saying the decision to scrap both articles in Jammu & Kashmir was imprudent and was done in haste by the ‘two idiots’.

“This is a clear assault on our constitution, our culture, and our democracy. The decision to scrap Article 370 and Article 35A was taken by two people who have no idea what they are doing. These two men (Prime Minister Narendra Modi and Home Minister Amit Shah) are hell-bent on destroying the nation from within and it is not unreasonable to ask why they have taken the route to dictatorship,” Yadav said.

Communist Party of India-ML general secretary Dipankar Bhattacharya also, in a press release, slammed the Modi-Shah team for removing the two Articles and dividing the state into two without any consultation from other parties.

“Never before in the history of India such attempt has been made to trash the constitution. However, in this moment of crisis, the entire nation is with the people of Kashmir and nationwide protest will be organized to oppose this dangerous step taken by the NDA government,” the communist leader said while demanding the restoration of Article 370 and 35A without any delay and removal of all troops from the region.

Former Bihar Chief Minister Jitan Ram Manjhi also opposed the move in Kashmir saying the draconian decision was taken when the Modi government was ‘under influence of alcohol’.

“This is pure and simple dictatorship and cannot be described any other way. I urge Chief Minister Nitish Kumar to step forward and do the right thing in this regard,” he said.

Though Kumar, who has been a staunch opponent of removal of Article 370 and 35A in Jammu & Kashmir, is yet to make a formal statement in this regard, other members of his party including K C Tyagi and Shyam Rajak have already voiced their anger over BJP’s sudden move.

“We have never favored what the BJP has done today and we will continue to oppose it in the coming days,” said Tyagi.