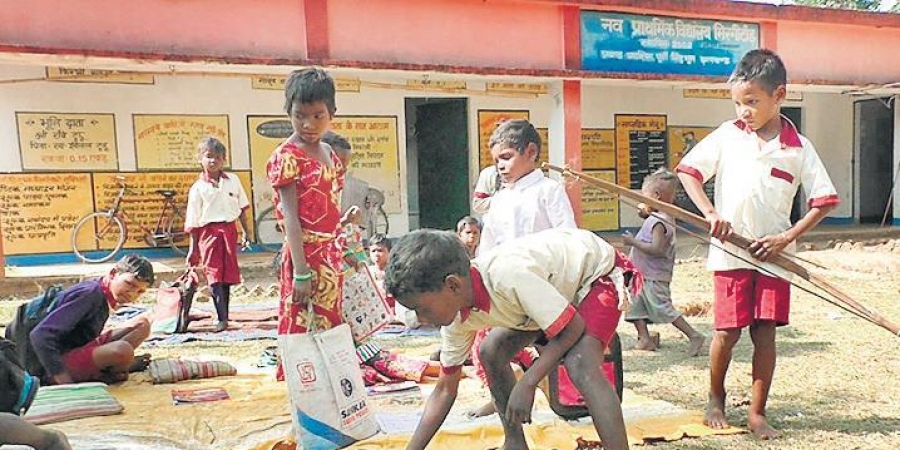 RANCHI:  Children at Mirgitand Primary school under Ghatshila block of Jamshedpur are being forced to carry bow-arrow, axe and other traditional weapons with them to their school due to the tiger menace in the region.

Notably, people living in the region are terrorised with the information shared by Forest officials that pugmarks of a tiger was spotted in the area which allegedly has killed at least three animals in the last 10 days.

Mirgitand village, surrounded with hills from all sides has forest cover in the radius of around 8 kilometres, where there is always a threat of attack by wild animals.

Panicked children who had refused to attend school, have now started attending classes with carrying bow-arrow and other traditional weapons. School Principal Bankim Mahto was seen coming to the school tying an axe on his motorbike.

Some of the parents also surrounded the school with bow and arrow in their hands while their children attended their classes. Forest officials, however, are yet to locate the tigress in the region and are tracking on the pug-marks found on in the jungles.

District officials on the other hand, admitted that people definitely are terrorised by the presence of tigress in the region.

“Since the area comes under Dalma Forest division, people living near forest areas definitely are terrorised with the fact that there is a tiger in the region after half-eaten carcasses of some animals were found in the jungles,” said Ghatshila Block Development Officer (BDO) Sanjay Kumar Das.