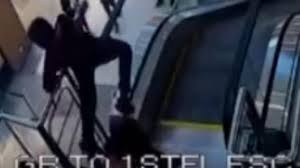 Thirteen-year-old Parthiv Shah, who fell to his death from an escalator in Ranchi’s Nucleus Mall, has once again raised an outrage over safety concerns in upscale malls and about preventable tragedies, which are allowed to happen because of largely unmonitored movement of visitors.

Closed circuit television camera footage acquired by the Ranchi police shows the boy climbing over the moving handrail of the escalator on the first floor to reach the ground floor.

It proved to be a fatal mistake by the boy who was apparently trying to have a feel of a moving slide on the escalators.

He climbed over the handrails but could manage to hang on it before he lost his balance and fell on the ground floor, 30 feet below. His skull was fractured, and within seconds, there was blood all around. Eyewitnesses recall he did not even cry and died on the spot.

The shocking footage shows how the boy, a Class VI student of Bridgeford School in Jharkhand’s capital city, awkwardly climbed the handrail chest down before losing his balance-and life.

In the footage, Parthiv is seen standing near the escalator with his hands touching the handrail. That was perhaps the moment when he seemed to have assessed the possibility of doing a stunt.

The 1.44-minute CCTV footage established that Parthiv’s fall was completely preventable and while the mall management, somewhat rightly, has blamed the incident on the guardians for not monitoring their children visiting the mall, the onus should also be on them for not deploying an adequate number of security persons to stop such a misadventure by visitors.

Parthiv was the only child of retired Navy man Raj Kumar and Ranchi anti-human trafficking unit sub-inspector Durga Gupta. The boy had gone to the mall for shopping with his relatives, who were not close by when the boy attempted the fatal stunt.

Accidents near escalators are not unusual in India.

In January this year, an 18-month-old toddler died after falling from an escalator at a Bengaluru Metro station onto the main road 50 feet below. The child, who was with her grandfather, suddenly slipped and suffered head injuries. She was rushed to a state-run hospital where she died.

In April 2018, a 10-year-old boy died of severe head injuries that he sustained when his school bag snagged in the moving handrail of on escalator in Chennai’s Express Avenue Mall.

A mall employee in Patna admits that most accidents happen because of “user behaviour.” “We have seen visitors running on escalators or walking backwards on them. Many times, we also see people not holding the handrails, and talking on mobile phones. All this can prove dangerous,” he said.

“The most common (reasons) that cause people to lose balance are because some refuse to hold onto the handrail, while others carry heavy objects. Besides, walking up the escalator steps and even leaning against the side of the escalator must be avoided,” added a security professional working with a mall in Patna. Escalators provide convenience, but the recent incidents are giving a bit of a scare.