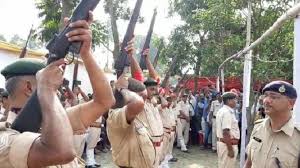 In a major embarrassment to Bihar Chief Minister Nitish Kumar, none of the 22 guns fired when former Chief Minister Jagannath Mishra was accorded a state funeral in his ancestral village Balua Bazar in Supaul on Wednesday.

According to the protocol, the former chief minister was to be given gun salutation by a guard of honour but none of the 22 guns fired during the funeral, which was attended by Nitish and senior ministers of the state government.

What was further shameful is the fact that the policemen tasked to fire the gunshots kept on trying repeatedly in front of the chief minister and other dignitaries, but failed.

It may be mentioned that the state government had decided that Jagannath Mishra would be accorded a state funeral as he was a three time Chief Minister but what transpired at the funeral only exposed the sloppiness of the state police.

RJD legislator Yaduvansh Yadav who was also present at the funeral has claimed that the incident was the insult to the former Bihar Chief Minister and demanded that a inquiry should be initiated in this case.