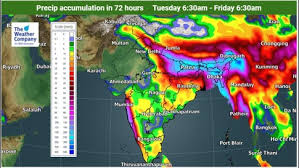 The Indo-Gangetic plain has been witnessing very heavy rainfall since Tuesday. As the monsoon gains strength over the region, the rains are forecast to increase and persist throughout the week.

On Tuesday, some areas in Uttar Pradesh witnessed torrential rainfall, with Bahraich recording 202 mm. Other regions, including Gorakhpur and Sultanpur in UP and Bhagalpur in Bihar, also witnessed rainfall of around 100 mm.

More rains are expected from Wednesday to Friday as the atmospheric circulation over the region is expected to be active. The cause for the downpour is a monsoon trough—an extended region where the atmospheric pressure is the lowest—that persists from east to west on the Indo-Gangetic plain. The well-marked low-pressure is expected to move up north along the Himalayas gradually. Therefore, in addition to UP and Bihar, Uttarakhand is also likely to experience extremely heavy rainfall this week.

The India Meteorological Department has issued a red warning (its highest level of vigil/action) in Uttar Pradesh from Wednesday to Friday and in Uttarakhand for Thursday and Friday. During this period, the department forecasts heavy to very heavy with extremely heavy rain at isolated places in the region. Bihar also has a yellow ‘watch’ warning for the entire week, with likelihood of heavy to very heavy rain and extremely rain at one or two places.

Normally, monsoon sets in over Uttar Pradesh on or around June 15. However, this year the arrival was delayed by over a week, and the monsoon reached the state only by June 22. The resulting deficit in rainfall in the northern region ranges from 23% in east UP to 31% in West UP and 47% in Uttarakhand from June 1 to July 9.