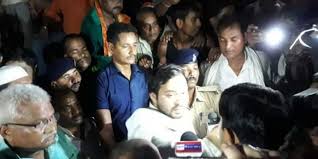 PATNA: Former deputy CM of Bihar and younger son of imprisoned RJD chief Lalu Prasad Yadav, Tejashwi Yadav staged a dharna amid rain in Patna on Wednesday night. Tejashwi sat on the dharna demanding immediate arrival of any senior official of the state government to assure the people that no further demolition of the milk market would take place.

As a part of anti-encroachment drive carried out by the Patna administration, some portions of the milk market, that was built by then CM Lalu Prasad Yadav were demolished. Tejashwi Yadav was apprised of this situation soon after he returned to Patna after months of political hibernation.

The protest led to traffic snarls and a complete lockdown of the area. “A complete mess has been created in the state by CM Nitish Kumar led government. We wouldn’t now allow it to continue in the systems and leave the state in a mess.  We will set everything right,” he said, adding that demolition of milk vendors market, near Patna junction, was deliberately done by officials.

The entire traffic movement in the city went haywire with hundreds of vehicles being stranded on the road. “I will continue on the dharna till the arrival of any senior official to assure to the people that no further demolition of the market would be don,” he said.

Meanwhile, upon knowing that his younger brother is sitting on dharna, Tej Pratap Yadav, the elder son of Lalu Prasad Yadav, also reached the dharna site and joined his brother.

“Now, my Arjun will demolish all those who are ruining the lives of poor people in government. I will be with him like Krishna,” Tej Pratap Yadav said. The ruckus continued till late night in and around the roundabouts near Patna junction by thousands of supporters of Lalu’s scions.