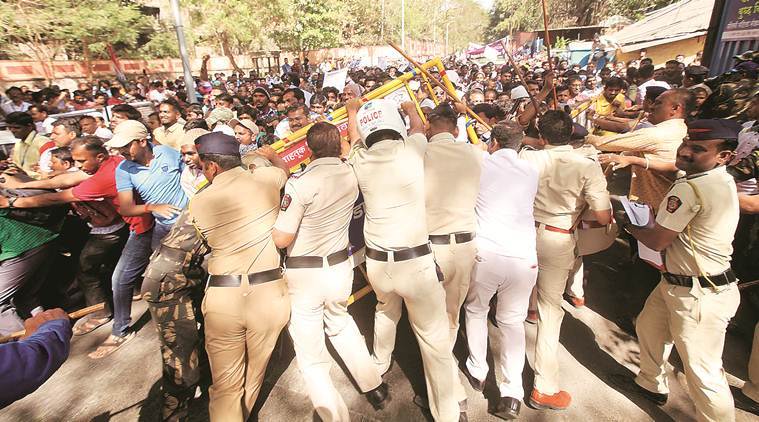 Internet services were shut on Friday as Meerut remained under heavy police deployment amid tension, days after a police lathi-charge on a group of people assembled at Indira Chowk in the city to protest against the mob violence in Jharkhand last month which led to the victim’s death four days later.

More than 50 people have been arrested so far in connection with the protest.

Badar Ali, who allegedly led the protests, was arrested on Thursday from near a mall in Meerut. The police will initiate proceedings under the National Security Act (NSA) against him; his properties will be seized, officers said.

Meerut SSP Ajay Sahni said: “Police patrolling is on since 6 am and the deployment was made as a precautionary measure. Internet services were shut since rumors of a Bharat Bandh were afloat. Members of the community concerned have claimed that they are not supporting the bandh and things have returned to normalcy.”

The accused have been booked under IPC Sections 148 (rioting armed with deadly weapon), 352 (assault), 336 (act endangering life personal safety), among others.

Meerut police personnel, along with members of Rapid Action Force and Provincial Armed Constabulary, were deployed in areas around Indira Chowk. A flag march was conducted by senior police officials, including Meerut zone ADG.

Since Sunday, local residents said, fewer people have ventured out of their homes.

Noor Hassan, who runs a welding shop near Indira Chowk, said: “It was supposed to be a peaceful march. Yes, there was no permission, but the police action made it worse. Now that Internet has been shut down and there is heavy police presence, people fear something might happen. Most people are not leaving home.”

On Sunday, a group of people led by Badar Ali congregated at Faiz-e-Aam Inter College and were supposed to conduct a 2-km march up to Hapur Adda to protest the death of Tabrez Ansari, who was beaten up by a mob in a Jharkhand village and allegedly asked to chant “Jai Shri Ram” and “Jai Hanuman”. He succumbed later.

According to the police, the group did not have permission for the gathering. Following arguments, the police said they had to do a lathi-charge to maintain law and order. No serious injuries were reported.