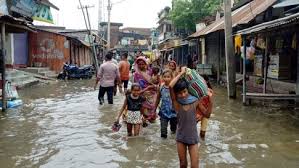 Ever since the monsoon swept the Bihar on June 22, the state has witnessed good rainfall. Bihar has received 333 mm of rainfall this season from June 1 to July 12— 9% more than normal for this time of the year. On Friday, the monsoon fury continued as many parts of the state were lashed with very heavy rainfall and thunderstorm.

The downpour is triggered by the monsoon trough—an extended region of low atmospheric pressure— that persists from east to west of Indo-Gangetic plain. This well-marked low-pressure has moved northwards since Thursday and a branch of it runs from northwest Bihar to northeast Bay of Bengal across Jharkhand and Gangetic West Bengal causing widespread rainfall throughout the region.

The Weather Channel met team has forecast the surface low-pressure to persist for the next 5 days leading to very heavy rain and thunderstorms across the region. The India Meteorological Department (IMD) has forecast heavy to very heavy rains with extremely heavy falls at isolated places across Bihar. The very heavy rainfall is very likely to continue in the state till Monday.

Water levels in all major rivers of north Bihar are rising due to the incessant rainfall in Bihar and Nepal. The Times of India reported that the river Gandak poses a flood threat to Muzzafarnagar and Champaran. The sorrow of Bihar, Kosi river, as well as other rivers like Karcha and Bagmati, are also likely to swell due to heavy rains. The authorities have been monitoring the situation.