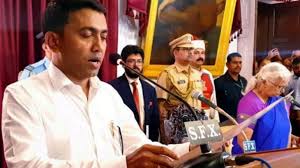 Former Goa Minister Rohan Khaunte on Wednesday expressed concern about hordes of labourers arriving at Goa’s Thivim railway station by the Patna-Vasco Express, while also stating that the immigrants could be used as vote banks by politicians.

Responding to Khaunte’s concerns, Chief Minister Pramod Sawant told the Goa legislative assembly that he had directed the North Goa Collector to probe the mass arrival of labourers by train number 12742 and their whereabouts.

“When a train full of labourers arrives in Goa, there is fear. Labourers come to Goa for work and then they get a plot with help of elements in panchayats, they build a house and then become voters. Where have they come from, what are their antecedents, needs to be checked,” Khaunte told the legislative assembly during Question Hour.

Khaunte’s comment comes days after a video of hundreds of passengers alighting the train number 12742 Patna-Vasco Express at the Thivim railway station in North Goa went viral on social media.

Nationalist Congress Party MLA Churchill Alemao also alleged that the employment ratio between Goans and non-Goans in the state’s casinos was skewed, urging the Chief Minister to ensure that more Goans get employment in the casino industry.

“80 per cent employees of casinos are outsiders. Casinos are needed for revenue, but they have to give jobs to Goans. Most of the jobs are taken by Manipuris and Nepalis,” Alemao said, even as Sawant assured the House that he would direct the state Labour Ministry to examine the issue.