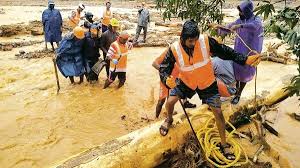 New Delhi: Even as parts of north and eastern India remain rain deficit this monsoon season, increased rain over neighbouring Nepal could spell trouble for some districts in Uttar Pradesh and Bihar, where the river levels are likely to rise during the next few days.

In its latest forecast, the India Meteorological Department (IMD) has stated that enhanced rainfall in Nepal till Wednesday could lead to a rise in the water levels in rivers in East Uttar Pradesh and Bihar over the next three days. This could lead to flooding of some of the low-lying areas along the banks of Yamuna and Ganga.

The Central Water Commission (CWC) has sounded a flood alert for all the districts in Bihar along the course of river Ganga from Buxar to Bhagalpur and districts in Uttar Pradesh downstream of Yamuna till its confluence with Ganga at Allahabad. “A close watch needs to be maintained all along the course of the rivers,” stated CWC in its latest update.

Yamuna has been rising due to continuous releases from reservoirs in Chambal, Ken, Betwa and Sone Basins in Madhya Pradesh, which has received excess rains this monsoon season. It is flowing in Severe Flood Situation in districts of Etawah, Auraiya, Hamirpur, Jalaun, Prattappur in Uttar Pradesh and is likely to cross the Danger mark in Allahabad on Wednesday.

The rainfall has been excess in West Madhya Pradesh to the tune of 54%.

This would further impact the flow in Ganga which is also expected to rise all along its course from Allahabad to Patna in Bihar over the next four days. Some of the other rivers which could rise include- Kosi, Gandak, Bagmati and Narayani.

On the eastern front, river Brahmaputra too is flowing in Severe Flood Situation in Jorhat district of Assam, due to heavy rain in the catchment areas.

Both Uttar Pradesh and Bihar have witnessed deficient rains to the tune of at least 20% each, despite an excess of 4% monsoon rains over the country this season. The deficit has been much more pronounced in neighbouring Jharkhand, where some districts are facing drought-like conditions. As on September 11, only northwest and eastern states of the country remain rain-deficit in the country.

The withdrawal of the monsoon is delayed yet again this season. Normally it begins to withdraw from the West Rajasthan around September 1.