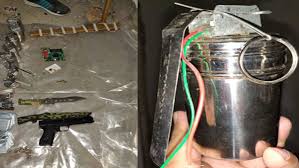 New Delhi, Sep 25: The National Investigation Agency has recovered improvised explosive devices based on the disclosure by a terrorist of the Jamat-ul-Mujahideen Bangladesh. JMB Terrorist Jahidul Islam alias Kausar, who is in NIA custody disclosed that after the Burdwan blast in 2014, he and his associates took shelter in various locations in South India. He said that the hideouts were at Aribele, Kadugodi, K.R.Puram, Chikkbanavara and Shikaripalya, Electronic City in Bengaluru.

NIA officials tell OneIndia that from the hideout in Electronic City, several incriminating articles meant to be used for preparation of IEDs and grenades such as two cuboid shaped batteries wrapped with plastic tape and electrical wire, one capacitor, three switches, one micro lithium cell, one plastic transparent box containing black colour chemical wrapped in a white paper, hand gloves, identity cards, rent agreement of one of the hideouts, handwritten letters in Bengali language, one digital camera and silver articles looted during dacoities committed in Bengaluru in 2018, have been seized.

He further said that he and his associates had test fired three rocket shells at Krishnagiri in Tamil Nadu. He said he and his associates, Habibur had prepared these rockets using a crude device. From here the NIA seized remnants of explosive materials such as 8 batteries of 1.5 volt each, a hollow cylindrical carton used for launching the rocket shell and pieces of electrical wire.

Jahidul was arrested in August for his role in both the Burdwan and Bodhgaya blasts. Islam, who is a member of the Jamaat ul Mujahideen Bangladesh was arrested from Ramagara, around 50 kilometres from Bengaluru, Karnataka. Based on specific information, the NIA raided his home.

During the search, the NIA found some electronic devices besides traces of explosives. He is a top leader of JMB in India and is wanted in Burdwan blast case and in many other cases in Bangladesh also. He is the master mind of the Bodhgaya case.

Earlier the NIA arrested two persons in connection with the planning of a bomb blast at the Bodh Gaya complex on January 19 2018. The arrested persons have been identified as Abdul Karim and Mustafizur Rehman, both residents of West Bengal.

They were arrested from the labour camp of Bengali speaking persons in Mallapuram in Kerala. The NIA says that the duo were hiding in this camp after planting the improvised explosive devices.

The NIA has so far managed to establish the identity of 10 persons involved in the conspiracy. With the nabbing of these two persons, the number of persons to be arrested in this case has gone up to 5.

The NIA says that the conspiracy was hatched by ten persons belonging to the Bangladesh based outfit, Jamaat-ul Mujahideen, Bangladesh.

It may be recalled that the Intelligence Bureau had warned that several illegal immigrants would look to make their way down south and the entry point would be Kerala. In the above mentioned case, the arrests were made from a Bengali camp. Officers have been saying for long that illegal migrants from Bangladesh take shelter in such camps, as it becomes hard for security agencies to detect.