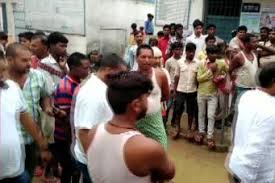 Eight people, seven of them children aged 15 years or below, were killed and eight others were injured after lightning struck them in Bihar’s Nawada on Friday afternoon, an official said.

According to Sub Divisional Officer, Sadar, Nawada, Anu Kumar, the children were residents of Dhanpur Musahari village falling under Kalichak police station area and had taken shelter under a tree while it was raining.

In addition, eight others were injured and seven of them were being treated at the Sadar hospital while the condition of another was stated to be critical and he has been admitted to Pavapuri in the adjoining Nalanda district, the official said.

Meanwhile, Bihar Chief Minister Nitish Kumar issued a statement expressing grief over the tragedy and announcing an ex-gratia of Rs. four lakh to the family of the people who lost their lives.

He also issued instructions for proper medical assistance to those who have sustained injuries, a release issued by the Chief Ministers office said.