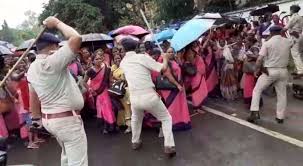 On 24 September, many protesting Anganwadi Sevika Sahayaka Sangh workers were beaten up in Jharkhand’s Ranchi by the police on the 40th consecutive day of their protest.

The protest was organised close to the Raj Bhavan in Jharkhand’s Ranchi. In a video of the incident one cannot see the presence of female police officials. A policeman can be seen punching a woman on her right arm after he kept beating her with a lathi.

The workers have been on a hunger strike for 12 days.

WHAT WERE THEIR DEMANDS?

2. Mini anganwadi sevikas should be treated the same way anganwadi sisters are treated.

3. To end the practice of an upper age limit while granting promotions to the anganwadi workers.

4. Anganwadi workers should be given social security benefits.

The Quint contacted the DGP of Jharkhand Kamal Nayan Chaubey, but the call went unanswered. The article will be updated as and when we get a reaction.