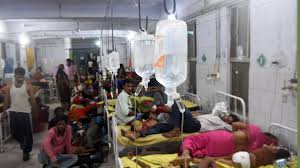 Two government doctors in Bihar have been penalised for extricating a patient’s gall bladder instead of performing a surgery on her leg, eight years after the incident. Both the doctors indicted in a departmental inquiry said they would challenge the government order–issued on Friday– in court.

While one of the two doctors has since superannuated, the other is serving in the Bihar health services.

The government has deducted 10 per cent pension of Dr Nand Kishore Mishra, the then assistant professor of surgery at the Sri Krishna Medical College Hospital (SKMCH), Muzaffarpur and stopped three annual increments of Dr Krishna Kumar, the then senior resident of the department of anaesthesiology at the hospital, with retrospective effect, said principal secretary, health Sanjay Kumar.

Kumar said the administrative action will send a clear message to all healthcare providers in Bihar.

Sushila Devi, spouse of Shiv Narayan Prasad of Bahbal Bazar village in Bihar’s Muzaffarpur district was to be operated for burn injury in her leg at the SKMCH on September 10, 2011, but the doctors ended up removing her gall bladder.

Dr Mishra said he neither treated Sushila Devi nor operated upon her and was penalised simply because the doctor who performed the surgery was in his unit. He called it a case of mistaken identity due to confusion created by the patient herself, and failure on part of the operation theatre staff and nurse to detect it.

“Dr HN Bharadwaj, the-then associate professor and also the head for SKMCH’s department of surgery and I were doing surgeries in two parallel operation theatres (OTs) on the fateful day. When the OT nurse called out the name of one Kiran Devi, this woman, identified as Sushila Devi, presented herself in front of the OT nurse. When the nurse asked the patient if she was Kiran Devi, she nodded her head in affirmative,” he said.

Asked why the patient had agreed to being identified by a different name, Dr Mishra said, “This may have been out of fear of her surgery getting deferred the third time. Even the anaesthetist claimed the patient nodded in affirmative when he asked her if she was Kiran Devi, who was originally scheduled to be operated for gall bladder stone. I was all this while operating upon another patient with common bile duct problem while another doctor operated upon Sushila Devi’s gall bladder believing her to be Kiran Devi. Since the doctor who did the surgery belonged to my unit, I was held guilty for a surgery I never did.”

Dr Mishra superannuated from the government service last year and claimed he has since not got any pension.

Dr Krishna Kumar, now an associate professor and head, department of anaesthesiology, SKMCH, too, felt he was not at fault.

“A senior resident of surgery department, who brought Sushila Devi to me, but with papers of Kiran Devi requested me to sedate her for surgery of the gall bladder. Even if the patient required surgery of the lower limb and not the gall bladder, my job was only to sedate the patient and ensure there was no complication arising out of anaesthesia. I did my job with sincerity and the patient recovered out of anesthesia and is absolutely hale and hearty. There were two surgeons who should have checked what surgery was to be performed. I am not at fault and will challenge the government order in court,” said Dr Kumar.

Kamla Kumari, the nurse, who called out the patient and brought her to the doctor, has already been penalised with stoppage of her four annual increments. She blamed the patient Sushila Devi for the case of mistaken identity.