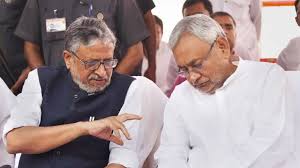 PATNA: Top leaders of the ruling National Democratic Alliance (NDA) in Bihar have hit the campaign trail together for the upcoming by-polls, also called the “semi-finals” ahead of the assembly elections due next year.

The itinerary seemed to highlight the coherence within the ruling coalition, with each constituent backing the others to the hilt.

This is in stark contrast to the five-party Grand Alliance which is riven by infighting and may end up posing a feeble challenge.

Duraunda is being contested by the JD(U) which has fielded Ajay Singh, husband of Kavita Singh whose election to the Lok Sabha from Siwan has necessitated the by-poll. Ajay Singhs mother Jagmata Devi had been the MLA from the seat until her death in 2011.

Kishanganj, a Muslim-dominated seat, is being fought by the BJP which has reposed its trust in the runner-up of 2015 assembly polls Sweety Singh who seeks to wrest the seat from the Congress which has fielded the septuagenarian mother of the previous winner Mohd Jawed, now representing the Lok Sabha seat of the same name.

Samastipur, a reserved seat, has fallen vacant upon the death of Ram Chandra Paswan, younger brother of the LJP chief who was serving his second term. The deceased leaders
son Prince is making his debut from the seat.

In addition to the three seats, by-polls are also scheduled in Belhar, Nathnagar and Simri Bakhtiyarpur all of which were won by the JD(U) in the assembly polls and have fallen vacant upon the incumbents getting elected to the Lok Sabha.

In Nathnaagar and Simri Bakhtiyarpur, Jitan Ram Manjhis Hindustani Awam Morcha and Mukesh Sahnis Vikassheel Insaan Party respectively have put up candidates despite candidates of the RJD which leads the opposition coalition being in the contest.

The Grand Alliance also includes the Congress and the RLSP which has not fielded its candidate in any of these constituencies.

Discord within the five-party formation was evident at the rallies with Manjhi and Sahni launching attacks on RJD heir apparent Tejashwi Yadav.

Yadav, on his part, remained conspicuous by his absence at a rally held in Samastipur where Congress candidate Ashok Kumar the runner-up of the last two elections, is once
again in the contest.