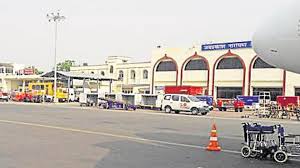 A three-hour suspension of operations after a fire tender got stuck near the runway at Patna airport on Wednesday afternoon forced the diversion of nine flights, delayed three others on the ground and held up the departure of other flights from Delhi, Mumbai and other airports affecting around 2000 passengers.

The fire tender had gone to extinguish a fire on the grass along the runway when it got stuck 22 metres from the runway edge, said an airport spokesperson.

The fire was caused after firecrackers were used to chase away birds which pose serious risk to aircraft. Airport authorities at Patna still use rudimentary methods to scare away birds from the runway.

“A crash fire tender (CFT) was immediately sent to the site to extinguish the fire. After extinguishing the fire, the CFT got stuck in the area possibly due to soft surface because of overnight rain,” the Airports Authority of India (AAI) said in a statement later in the evening.

“The CFT was removed with help of cranes and other earth moving equipment, available at the ongoing new airport terminal building project construction site,” the statement added.

All incoming flights to Patna were diverted between 12.30pm and 3.16pm. Air operation was shut from 12.10 pm, when the Air Traffic Control (ATC) spotted the fire in the grass, and restored at 3.40 pm. The AAI issued notice to airmen (NOTAM) for temporary runway closure from 1.10 to 3.30 pm.

Among the flights diverted were four of IndiGo, two each of GoAir and of Spice Jet and one non-schedule charter flight of Saraya Aviation.

Three flights were diverted to Varanasi, and two each to Lucknow, Kolkata and Ranchi.

Among the flights diverted to Varanasi were IndiGo 6E-811 flight from Kolkata to Patna; Saraya Aviation’s VTEJZ flight from Delhi to Patna; and SpiceJet’s SG-6258 from Bengaluru to Patna.

Interestingly, air traffic controllers had given IndiGo’s flight to Delhi the clearance for takeoff, but the pilot decided against it as it was fraught with risk. The pilots returned to the parking bay from runway 07 after which the AAI sought NOTAM for temporary closure of runway.

The AAI’s decision to send the CFT, which weighs around 37 tonne within 22 metres of the runway’s edge on unmetalled surface especially after Patna registered 94.4 mm rainfall on Tuesday evening, has also come under the scanner since the fire engine can easily fight a blaze from a distance of almost 90 metres.