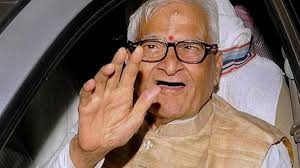 Jagannath Mishra, three-time Bihar chief minister and a former Union minister — terms which earned him a mix of accolades and criticism — died on Monday at his home in New Delhi. He was 82. He was suffering from multiple medical ailments, including cancer. He will be cremated with full state honours. He was survived by three sons and three daughters.

Though Doctor Sahib, as he was fondly referred to, had stepped out of the spotlight while leading a retired life, Jagannath Mishra was never short of political wisdom and sharp analysis. Many in media and politics recall him as an affable man with a deep understanding of politics and abiding love for Bihar and all its people.

When the Congress lost power in Bihar, Jagannath was inducted as Union agriculture minister in the PV Narasimha Rao government in 1995. In 1999, he joins Sharad Pawar in opposing Sonia Gandhi on her foreign origin issue. Later, he left the Congress to join the Janata Dal (United) of Nitish Kumar, becoming the director of LN Mishra Institute of Management — a cabinet minister’s position.

For someone who began his career as a professor of economics in Bihar University, Jagannath Mishra touched many political peaks in his career. He took over as Bihar’s chief minister after the assassination of his brother in January 1975.

Lalit Narayan Mishra was attacked with a bomb while inaugurating a broad gauge railway track between Samastipur and Muzaffarpur in north Bihar on January 2, 1975. He was declared dead in Danapur railway hospital the next day. Jagannath Mishra, who too had been severely injured in the incident with multiple splinters piercing his legs and thighs, survived to achieve many political peaks in his career.

Remembering him as a “famous leader and educationist,” Bihar Chief Minister Nitish Kumar paid tributes to Dr Mishra saying he made an invaluable contribution to the politics of Bihar and India. “His death is an irreparable loss in the field of politics, society, and education,” Nitish Kumar said in a statement.

In his heydays, Jagannath Mishra had emerged as the most powerful Congress leader in the late seventies and eighties. He was known as a very popular mass leader, with ears to the ground and hands of political pulse of Bihar. Prior to emergence of Lalu Prasad on the political landscape of Bihar, Jagannath Mishra was the most popular leader among the minorities for making Urdu as the second official language of the state in 1980.

A man with sharp intellect and a perfect practitioner of populism, Jagannath won over the hearts of lakhs of teachers by taking over hundreds of private primary, middle and high schools across the state in 1977.

Dr Mishra also had a fair share of controversies in his political careers. One of his most infamous actions was seen in July 1982, when his government pushed the Bihar Press Bill, which prohibited the publication, sale and possession of any printed matter that was “scurrilous” or “grossly indecent” or “intended for blackmail.”

Though Dr Mishra claimed he supported the free press, his moved was criticised as draconian and dictatorial and also an attempt to gag the press. The move was responded with unprecedented protests from newspapers, as journalists staged a protest on the streets. A year after, the then Bihar government withdrew the bill, which was not given the presidential assent till then.

Dr Mishra was also convicted in the infamous fodder scam case. He, however, was granted bail. Dr Mishra always blamed former Congress president Sitaram Kesri for having his name deliberately included in the scam.

While historians and political scientists will continue to debate whether he could have done better or rose higher, it is true that Dr Mishra has left a rich legacy and will always been remembered as someone who cared for Bihar. 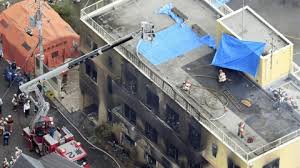 Kyoto is a city in Japan with many Buddhist temples and historical structures. Today, it is in the news for an arson attack on one of its most significant cultural centres – an animation studio.

The attack has killed 33 people, and Japan is in mourning. This studio – Kyoto Animation – is home to some very popular anime (hand-drawn or computer animations). One of them is currently playing on Netflix India – Violet Evergarden.

Another popular anime, ‘K-On’, is about musically inclined high-school girls and their trials (airs on Hulu).

In fact, Kyoto Animation is known for aesthetically presenting emotions about life and its various emotions. How good is their work? They have a tremendous fan following, and you will find tributes from fans all over the world. America, in fact, is undergoing an anime renaissance, with more fans attaching themselves to new releases. And as per a 2018 article, anime popularity is increasing in India. And among fans, many works of Kyoto Animation are favourites.

There’s another importance to this place – much of its staff is a full-time hire, unlike the industry trend that promotes part-time and contractual work (with little pay). Naturally, Kyoto Animation attracted some of the best talent in Japan, some of whom make great art.

And that’s what has been lost today. Good art and great stories.

Stories about friendships and dilemmas that centre around a sport (Free), science fiction stories that bring out human emotions (The Melancholy of Haruhi Suzumiya).

And a personal favourite – a story about bullying and forgiveness and love. This anime, titled ‘A Silent Voice’, is also in the form of a comic book. It was given to me by a student I taught for a term. She is an ardent fan and I reckon that the content of this anime, with its myriad emotions, resonates with her just as it does with me.

And while she is more comfortable in Marathi and is not usually outspoken, my other acquaintances who like Kyoto Animation are opposites – one is an English speaking elite and the other is an extroverted middle class man more comfortable in Internet cultures than any other culture.

A Pune police team on Wednesday searched the residence of human rights activist Father Stan Swamy in Ranchi in connection with the Bhima Koregaon–Elgaar Parishad case and for his alleged Maoist links. This was the second time the city police raided his house in Ranchi’s Namkum area.

While electronic devices, including a hard disk and some other materials, were seized, the 83-year-old activist was not taken into custody.

The Pune police were assisted by the Ranchi police in the search that lasted nearly three hours, said sources.

Ashutosh Sekhar, Superintendent of Police, Ranchi (Rural), told The Hindu, “The search began after 7 a.m. and lasted nearly two-and-a-half to three hours. The Maharashtra police team took some electronic material and some documents. They will examine this material and decide on the future course of action.”

Raids were conducted by the police at Fr. Swamy’s residence on August 28 last along with that of six other academics and activists known for their dissentious views against the powers that be.

Assistant Commissioner of Police (Swargate division) Shivaji Pawar, the investigating officer in the case, told The Hindu that the police seized some electronic devices and other material from Fr. Swamy’s house. “We have not taken him into custody. We conducted this operation for gathering more evidence as a part of the ongoing investigation in the case. The materials seized will be sent for probe,” he said.

Fr. Swamy runs a school for Adivasi children and a technical training institute in his residential premises. A vocal critic of the Jharkhand government, he is known for his work among the tribal people of the State through his NGO, Bagaicha.

In 2016, he released an expose following a Jharkhand undertrials’ study, which showed that an overwhelming majority of the tribal people languishing in jails were falsely implicated and arrested for daring to protest against the violation of their constitutional and human rights.

On August 28 last, the houses of activists Sudha Bharadwaj, P. Varavara Rao, Vernon Gonsalves, Arun Ferreira, Gautam Navlakha and Anand Teltumbde were raided, along with that of Fr. Swamy as part of the second crackdown by the Pune police on alleged ‘Maoist sympathisers’ as part of their investigation into the Bhima-Koregaon clashes.

Four of them, including Ms. Bharadwaj, Mr. Rao, Mr. Gonsalves and Mr. Ferreira are now lodged in the city’s Yerwada Jail.

On June 6 last year, the city police, in its first nationwide crackdown in the case, arrested five activists, including Dalit publisher Sudhir Dhawale, advocate Surendra Gadling, Nagpur University professor Shoma Sen and activists Mahesh Raut and Rona Wilson for their alleged links with the outlawed Communist Party of India (Maoist) and their roles in the ‘Elgaar Parishad’ and the Bhima-Koregaon clashes.

Two charge sheets have been filed against a total 23 accused in the case on a number of counts, including for alleged Maoist links, veering youths towards Maoism and attempting to destabilise the State. The first charge sheet, a 5,160 page indictment, was filed in November 2018 and the second in February last.