Amidst the reports of soaring onion prices across the country, a case of onion theft worth more than Rs 8 lakh from a dealer’s godown has surfaced from Bihar.

Dheeraj Kumar, the godown owner alleged on Monday that he found the godown broken in and 328 bags of onion along with cash missing when he came in the morning.

“At around 6 in the morning I came to know that the door of my godown was broken, approximately Rs 8 lakh worth of onions kept in 328 bags, cash of Rs 1 lakh 73 thousand and a television set kept in the godown were stolen,” Kumar told reporters here.

He, however, added that he had insured the goods in his godown and therefore was hopeful of getting some relief.

“The godown was built in a desolate spot where usually people do not visit after eight at night, the theft could have happened anytime in the night. My goods were insured, I will lodge an FIR and then try to get the amount from the company,” Kumar said.

Vinod Thakur, the police inspector agreed that a theft had taken place and prima facie it seemed that it was onion and bags which were stolen from the godown.

“The shutters were up and the doors of the room were open, the lock of almirah too was broken. We have begun the investigation and try to nab the culprits,” Thakur said. 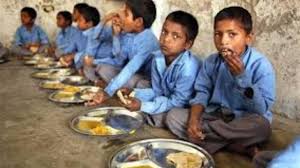 Even as Jharkhand is reeling under growing poverty, malnutrition and starvation, over 1,200 quintals of food grains were found rotten in a warehouse at Ranchi. On investigation, glaring lapses and negligence were found as reasons leading to the massive wastage of the food grains, meant to be sent to different schools for mid-day meal.

The food grains were stocked and had arrived for the distribution among the Antyodaya Ration Card holders and 1009 quintals of cereals were supposed to be sent to different schools for mid-day meal.

The manager of the godown said that the roof of the godown was damaged and led to the leakage of rainwater during monsoon. He said that previously rejected stock was kept with the fresh food grains, and further damaged the fresh stock.

When Aajtak’s team went inside, the godown was stinking because of the rotten grains.

Food and supplies minister Saryu Rai said that despite many letters to the education department, the 1,009 quintals of cereals meant for distribution for mid-day meals were not collected, also the letters went unresponded. However, he added that erring officials would not be spared, and stringent action will be taken against the guilty.

Meanwhile, the Opposition latched on to the opportunity to grill the government. Congress spokesperson Alok Dubey accused the BJP-led state government of neglecting the interest of beneficiaries who depend on Public Distribution System for their monthly ration.

The advisor to the Supreme Court on Right to Food, Balram, alleged that the failure of the PDS system has once again been exposed. It has failed miserably to deliver, leading to the storage of food grains in the warehouse for long, leading to damage.