Five more people died in Bihar floods, pushing the death toll up to 97 on Saturday, as over 69 lakh people were affected in 12 districts, the state’s disaster management department said. Of the fresh five deaths, four were reported from Madhubani district, which has so far accounted for 18 casualties, and one from Darbhanga district, where a total of 10 people have died in the deluge.

Sitamarhi, with 27 deaths, remained the worst-hit district, the disaster management department said in a report. The number of deaths in other districts are Araria (12), Sheohar (10), Purnea (nine), Kishanganj (five), Supaul (three), East Champaran (two) and Saharsa (one).

Muzaffarpur and Katihar districts have not reported any death in the flash floods that hit the state in the wake of torrential rains in the catchment areas of neighbouring Nepal last week.

Around two lakh more people were affected by the flood on Saturday, pushing the overall figure to 69.27 lakh though the districts hit by the deluge remained 12. Over one lakh people have been displaced, with 1.14 lakh taking shelter at 131 relief camps of which 126 have been set up in Sitamarhi alone.

Food is being prepared for the affected population at 859 kitchens and distributed by 796 personnel equipped with 125 boats, who are assisted by 19 teams of the NDRF. Deputy Chief Minister Sushil Kumar Modi and Disaster Management Minister Lakshmeshwar Roy surveyed the worst-hit Sitamarhi and Madhubani districts, respectively, to take stock of relief and rehabilitation work on Saturday.

Modi said, “Those affected by a calamity have the first claim on the coffers of the state.” He asked officials to ensure that dependents of those who died in the flood are paid ex-gratia expeditiously, and no surviving flood victim is denied financial assistance.

Water levels have begun to recede in nearly half a dozen rivers which are, nevertheless, flowing above the danger mark at a number of places. The weather department has predicted heavy rainfall during the next two days in some of the affected districts which may have an adverse impact on the flood situation. 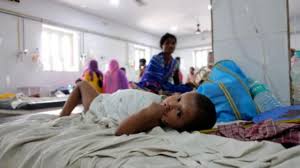 s many as 162 children died due to acute encephalitis syndrome (AES) in Bihar till July 2 this year, while 63 fatalities were reported from Assam, Jharkhand, Maharashtra, Manipur, Odisha, Uttar Pradesh and West Bengal till June 30, MoS Health Ashwini Choubey said on Tuesday.

Responding to a question over whether lychees were the cause of deaths, the minister, in his written reply in Rajya Sabha, said consumption of lychee was safe for healthy individuals, but in “malnourished children, it triggers hypoglycaemia and leads to seizures or AES”.

“A research study was conducted by the National Centre for Disease Control (NCDC), along with partner institutions, in the year 2013-14 wherein it has been found that when lychee is consumed by malnourished children, it triggers hypoglycaemia and leads to seizures or AES like picture,” Choubey said in his written reply.

On the basis of the study, an intervention strategy for awareness and nutritional supplementation was recommended to the state, the minister said.

A comprehensive study incorporating various other aspects of aetiology has been initiated by the Ministry of Health under Indian Council of Medical Research (ICMR).

“In 2019, a total of 162 deaths of children have been reported from Bihar till July 2 due to AES. As per information received from the National Vector Borne Disease Control Programme (NVBDCP), 63 deaths have been reported due to AES till June 30 from other seven states of the country — Assam (25), Jharkhand (2), Maharashtra (1), Manipur (1), Odisha (1), Uttar Pradesh (17) and West Bengal (16),” his reply stated.

He also elaborated on a number of measures that the Centre has initiated to support the Bihar government in the containment of AES, while adding that “as per constitutional provisions, health is a state subject”.

Choubey, in his reply, said Union Health Minister Harsh Vardhan had reviewed the situation with his counterpart in Bihar and also with officials from the ministry.

A team of experts, consisting of public health specialists from various central government institutes, was deputed to assist the Bihar government in taking immediate measures to contain AES, he said.

The Health Ministry had sent another high-level multi-disciplinary team, which included senior pediatricians from various central government institutes, to Muzaffarpur.

Epidemiologists from the National Centre for Disease Control (NCDC), senior pediatricians, laboratory technicians are in Muzaffarpur since June 12.

The NCDC’s Strategic Health Operations Centre (SHOC) was engaged to monitor the situation in Muzaffarpur and co-ordinate tasks at the field level, Choubey said.

He said the Health Ministry had deputed five teams of doctors, along with technicians from central government hospitals, to SKMCH to support clinical management.

“A central team, consisting experts from Indian Council of Medical Research (ICMR), was also deployed at SKMCH. The team is also scrutinising and reviewing the case records of discharge and deceased patients using a standardised tool to know the reasons for mortality,” he added.

The death toll due to the Acute Encephalitis Syndrome outbreak in Bihar has reached 100 and despite claims made by state government, the number of deaths are increasing with more and more infected children rushing to the hospitals.

Muzzafurpur district is mainly affected by the outbreak and 83 children have succumbed to Encephalitis at Sri Krishna Medical College while 17 died at Kejriwal hospital. The union health minister Harsh Vardhan visited the Muzaffarpur yesterday  and took stock of the situation. Different media reports said that the minister was shown black flags. However, the minister said he has spoken to  “every concerned individual about this issue”.

The situation turned grim when a five year od child while three minsiters around and this enraged the anger of the parents of the children and they confronted the ministers. Vardhan, however, later held a meeting and assured a research that would be undertaken to ascertain the cause of the disease to order any such outbreak in future. He was quoted News18.

“I assure the people of the area, especially the affected families, that the government will extend all possible help and measures to the state government,” Vardhan said.

Despite all problems and considering the seriousness of this disease, I appreciate the efforts put in by the doctors to ensure efficient treatment to everyone,” he added.

Nitish Kumar, the CM had also expressed grief over the deaths of the children and announced “an ex gratia payment of Rs. 4 lakh to the next of the kin of those who have died”. The lack of awareness about his to tackle the decease is also the reason for outbreak, the CM said.

The health department of the state has cited hypoglycaemia in which the blood sugar level go down as the main reason behind the deaths of the children. Acute Encephalitis Syndrome is a viral diseases that has symptoms like high fever, convulsions and headaches. 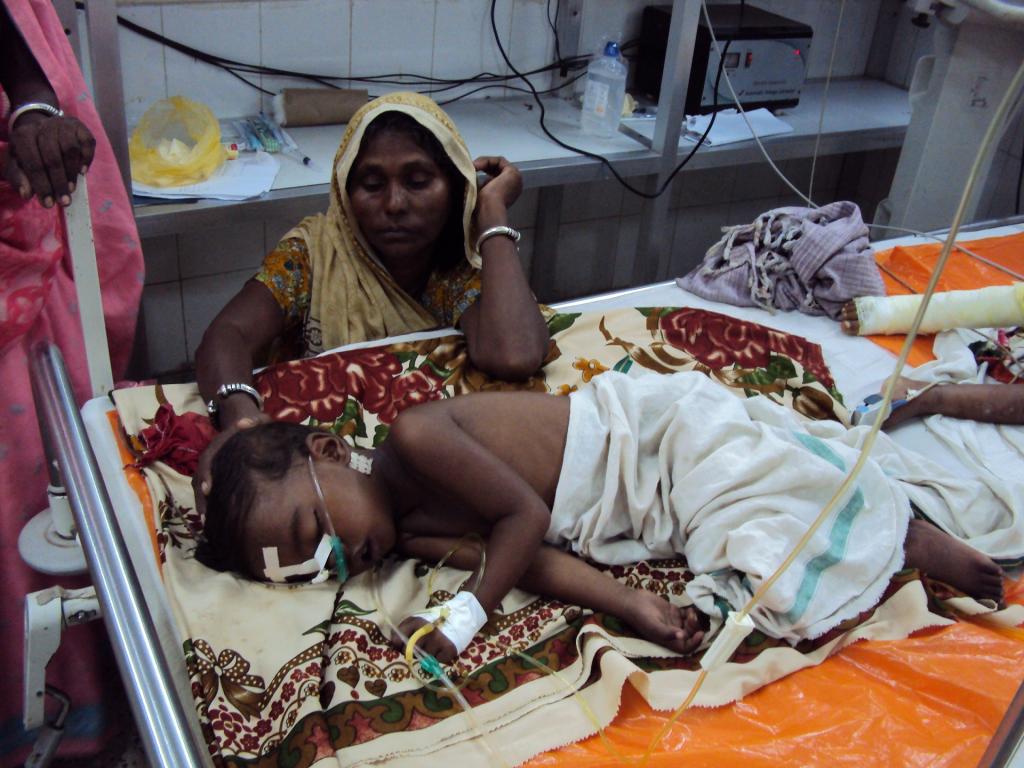 Patna: In the last nine days, several children have died in North Bihar of suspected Acute Encephalitis Syndrome (AES). On Monday alone, about 20 children reportedly died, while three deaths were reported early Tuesday in Muzaffarpur town hospitals. As per reports, five five children died in two villages — Harvanshpur Paschim and Khirkhaua under Bhagwanpur police station in Vaishali district — in last the 24 hours due to symptoms similar to AES after being admitted to hospital.

As helpless parents look on, dozens of children are still battling for their lives with symptoms similar to AES and are undergoing treatment at two hospitals in Muzaffarpur. So far, the disease has already claimed the lives of 53 children, but the state government is playing these deaths down by claiming that these were due to hypoglycaemia.

In Muzaffarpur, the state government-owned Sri Krishna Medical College and Hospital (SKMCH) and private Kejriwal Hospital, where most of deaths took, have names and address of the victims. But state government, particularly the health department, is not prepared to accept this reality.

Meanwhile, Bihar Health Minister Mangal Pandey has denied that these deaths were due to AES. Pandey, a senior Bharatiya Janata Party (BJP) leader, said that only 11 children had died since June 2 and most of the deaths were due to hypoglycaemia, adding that only one child died due to Japanese encephalitis. “There is a situation of misconception in connection with deaths of children in Muzaffarpur. We have got information of deaths due to hypoglycaemia, except one death due to JE,” he was reported as saying.

AES cases have surfaced in Bihar in such a large number after a gap of three years. Last year, a total 40 cases of AES were reported in which seven deaths occurred.

But this year, the situation is alarming, said sources. This can be gauged from the fact that the two paediatric intensive care units at SKMCH are full and the hospital authorities were forced to open a third PICU to accommodate fresh cases. Ironically, with heavy rush of seriously ill children on Monday, there were no bed available to admit new suspected AES cases in the PICU the hospital and officials had to get the general ICU vacated by shifting patients to other wards.

“We have been admitting seriously ill children in PICU and the general ICU to provide treatment in view of the situation and regular arrival of new patients” SKMCH’s chief medical officer, S P Singh, said.

SKMCH superintendent Sunil Kumar Shahi said “It took us by surprise. We hardly expected such a bounce back this year”.

Helpless parents, after failing to get their seriously ill children admitted in SKMCH, are left with no option but to rush to privately run Kejriwal Hospital in Muzaffarpur.

Most of the children with suspected AES belonging to the rural poor section (dalit, other backward classes and extremely backward classes) of the population in Muzaffarpur and the neighbouring districts of Vaishali, Sitamarhi, Samastipur, Sheohar, East and West Champaran.

Locally known as Chamki Bukhar or Mastishk Bukhar, AES is widely seen as a deadly disease for children in flood-prone North Bihar districts. While the cause of deaths of children may be AES or any other, Sanjay Kumar, the principal secretary in the health department, reiterated that the deaths this year had occurred due to hypoglycaemia, resulting from high heat and humidity.

Kumar explained that when children play in the open under the scorching sun, it leads to dehydration and affects their intake of food and water, leading to hypoglycaemia.

According to him, Bihar had reported 34 cases of hypoglycaemia, resulting in 10 deaths till date this year, while one death was due to dyselectrolytemia (electrolyte imbalance).

However, with increasing cases of suspected AES, the state government has introduced a verbal autopsy form to fix responsibility for any lapses in treatment and referral. “We have a standard operating procedure for treatment of AES”, he added.

The health department has also issued an advisory urging parents to prevent their children from playing in the open under the sun at a time when the temperature was hovering between 42 to 43 degrees Celsius.

Interestingly, contrary to the denial of children deaths due to AES by a top health department officer, chief minister Nitish Kumar on Monday at a press conference, in reply to question on child deaths due to AES in Muzaffarpur, said the health department had been keeping a close watch on the situation. “Ahead of the rains (monsoon) ,every year this disease (yeh bimari) creates havoc. It is a matter of concern that every year children are dying due to it”, he said.

The chief minister said the health department had taken steps to contain the disease and was sensitising the people about measures to prevent it.

According to doctors, AES is a severe stage of encephalitis characterised by inflammation of the brain. The disease is transmitted through mosquito bites, leading to infection that causes high fever.

“Every year, encephalitis hits Muzaffarpur, Gaya and other neighbouring districts in May or June. But this year it seems to have affected a large number of children,” a health department official said.