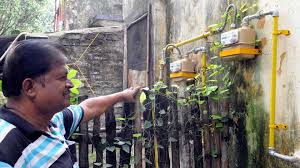 Around 3,000 households in Ranchi’s Mecon Colony will get piped cooking gas supply from August 23 while over 2,000 households of Jamshedpur will receive the same from September 8, GAIL officials said .

The Gas Authority of India Limited (GAIL), which has been carrying out the infrastructure development and pipeline work from last one year, is preparing a roll-out the project in Jharkhand’s two biggest cities. It would benefit over 5,000 households in the initial phase.

“We have received the launch date for Ranchi on August 23 and September 8 for Jamshedpur. Pipeline connections have been provided to 3,000 households in Ranchi, while 2,000 in Jamshedpur,” said GAIL executive director (eastern region), KB Sinha.

“Two CNG stations, one at Khukri in Doranda and another at Madhuban (Ormanjhi), will also be inaugurated on August 23 in Ranchi. Since the CNG and PNG will be transported from Patna through cascading system, it might be little costlier in Ranchi. However, the GAIL’s Ranchi authority is yet to announce the rates of the gases,” he said. A cubic metre PNG costs around Rs 31, while as one kilogramme of CNG costs around Rs 61 in Patna. The GAIL officials said, PNG price would be more or less same in Ranchi , while CNG might cost Rs 8 to Rs 9 higher in Ranchi than Patna.

The prices, however, will drop after the Centre’s ambitious Jagdishpur-Haldia and BokaroDharma gas pipeline projects reach Ranchi.

The main gas pipeline would reach Ranchi through Chatra, Hazaribag, Bokaro and Ramgarh. It will cover 551-km in Jharkhand comprising 362 villages in 12 districts.

In a meeting with Jharkhand chief minister, Raghubar Das, and union petroleum minister, Dharmendra Pradhan, in Ranchi on Tuesday, the progress of the city’s gas distribution was discussed. Pradhan said, the gas pipeline projects in two cities would be started by first week of September.

In Jharkhand, merely 18.9% households use clean energy such as LPG and electric kitchen appliances, while 81% are still dependent on wood, coal and cow dung cakes for fuel in kitchens.

The national average for usage of clean energy in household is 43.8%, Petroleum and Natural Gas Regulatory Board (PNGRB) officials had said during a road show in Ranchi in January this year.

The CNG-run vehicles are expected to lower down the vehicular pollution in Ranchi and Jamshedpur. However, operation of such vehicles would take some time, as mere two CNG stations would not serve the purpose, experts said.