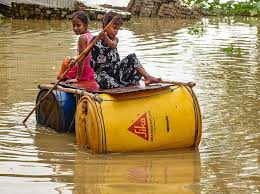 In Kerala, red alert for rain has been withdrawn from all the districts in the state. After a week of heavy downpour, intensity of rain has now reduced.

Heavy rain is expected in Kannur and Kasargod.

Four people have died so far in the state.

In Bihar too, significant improvement has been registered in flood situation. As rains stopped, rivers are also on receding trend. In Darbhanga, large areas are still submerged and which is hampering normal life.

With fields and villages inundated, people are still using boats to move around. Administration has also put greater focus on relief and rehabilitation measures. People who had moved to safer places and highlands, have also started returning to their homes.

In Motihari and Madhubani, floods have left behind a long trail destruction. Large areas are still inundated while heavy losses to property have been reported. Those who had shifted to safer places are have a long road to restart. Administration is putting a greater focus on relief and rehabilitation.

In Muzaffarpur, camps are being set up to provide necessary assistance to flood affected. Those in need of medical care are also visiting the camps and are getting the required help.

In Assam, relief and rehabilitation measures are being intensified following the improvement in flood situation. t hough rivers are receding, flood water in parts of the state continues to affect normal life. In Bongaigaon, heavy rains in the past few days have severely affected roads which causing hardships to locals. In some areas, people are still using boats to move around. The assessment of damage caused to houses is currently on.

A free medical camp was organized by Joypur Army Camp, Dao Division, under Operation Sadbhavana, 2019 in Neul Goan and its adjoining villages. A large number of flood affected people and sick persons were treated and free medicines were distributed at the health camp. The health camp was conducted by three doctors, one from army and two from Jorhat Medical College & Hospital. Few villagers have return to their respective village after the condition has returned to near normalcy.