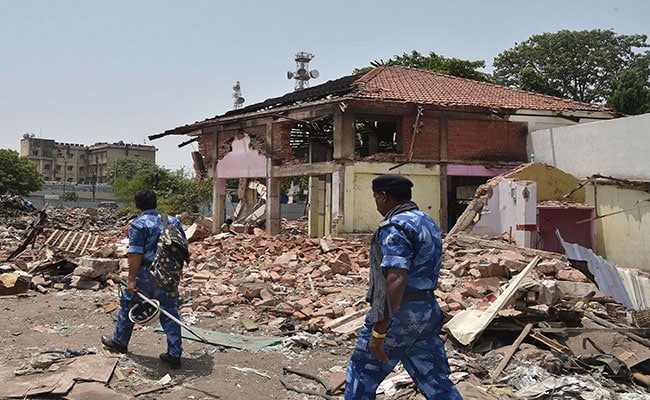 
Patna: ﻿ The over 100-year-old Gole Market in Patna, a unique heritage building constructed as the Bihar capital’s first planned municipal market, has been demolished by local authorities as part of a Smart City project.

The demolition work began on Friday and by Sunday the historic landmark, located in the heart of Patna and endowed with beautiful red-tiled roof, was reduced to a skeletal shell.

“The Gole Market was demolished as part of a major redevelopment project of the railway station area under the Smart City initiative. Other markets lining the streets are also being knocked down as part of the mega project,” Patna Municipal Commissioner Anupam Kumar Suman told news agency Press Trust of India.

As part of this Smart City project, the now-dismantled Gole Market, located near Patna Junction, will make way for a seven-storeyed commercial complex and a modern municipal market along with a vending zone will come up in the area adjoining the Station Road, he said.

Popularly known as Gole Market, among the local people, it was Patna’s first planned municipal market designed by architect Joseph Fearis Munnings while he was planning the layout of the “New Capital” city of colonial Patna after the creation of the new province of Bihar and Orissa in 1912.

Despite the historical value of the building, the demolition has drawn feeble protest from citizens of the city, but many people in Patna are angered by this “shocking move” of the Patna Municipal Corporation (PMC).

“This is just madness. It was a historical building and should have been preserved. But, instead of restoring and reusing it as a cafe or something, the corporation razed it,” said city-based researcher and author Arun Singh.

“One by one the local government is knocking down heritage buildings in the city. This is an attempt to erase the colonial history of Patna in the name of development,” he alleged.

In December last year, the 133-year-old Anjuman Islamia Hall, perhaps the first public hall of Patna, was demolished to make way for a modern complex.

The heritage market had faced decades of neglect and its occupant shopkeepers had been feeling the shadow of the wrecking ball for years as local authorities had planned a redevelopment project much earlier too, which kept on getting stalled, a local shopkeeper, who did not wish to be named, said.

“My grandfather had a meat shop in it during the British time, and elite of the city would come in their cars to buy meat, fish, chicken, eggs, grocery and milk. It should have been preserved,” he said.

“It was a unique single-storeyed building with a raised central hexagonal core topped with elegant red-tiled roof and two flanks came out of it and again it was topped with red tiles of the colonial-era Burn & Co. It was a perfect building and a perfect setting for a heritage cafe,” he told PTI.

“Smart City also means preserving our architectural legacy and not just building new ones,” he said.

PMC Commissioner Suman, when asked why the building was demolished, said, the Gole Market was “coming in the middle” of the layout of the Smart City project plan.

“There were suggestions made to us by a few heritage lovers to preserve the building and reuse it as a cafe. We tried but the market structure was coming in the way of the plan. So, we had no option left but to knock it down,” he said.

“Also, besides the fact that it was designed 100 years ago by Munnings as the first municipal market, there was not much heritage value of it. And, sometimes we have to lose something old to build a new, better future,” the municipal commissioner said.

However, the iron shell of the building and whatever can be salvaged will be stored and later reused in a new gazebo at the site, Mr Suman said.

“That gazebo will be built with new material and old material from the dismantled Gole Market. We are trying to look into our archives to know about the history of the building, which along with old pictures would be displayed there, so that people will know there was a Gole Market here,” he said.

Retired bureaucrat R N Dash, who served as the district magistrate of Patna from 1972-74 and Divisional Commissioner from 1983-85, also said that demolition was a “wrong move” and that restoration and proper rehabilitation of local shopkeepers should have been planned instead.

“The overall master plan should have ensured the preservation of the market and other heritage buildings, and Smart City project should have factored that in. Converting it into a cafe was a good idea and people coming to these complexes would have visited too, so it was a win-win situation,” he said.

Ironically, Gole Market was also listed as a heritage building in a 2008 Bihar goverment publication — Patna: A Monumental History.

Mr Singh, whose book “Patna – Khoya Hua Shahar” came out early this year, talks about the history and glory days of this market, located in what is termed officially as the New Market area, falling between the railway station rotary and the Patna GPO roundabout.

“In its heydays, it had a rose garden around it and six routes leading to it from the streets around it.

“British people including European women would visit there as would the Indians in their cars. Instead of restoring old charm, as done world over, Patna is wilfully destroying its own heritage,” he rued.