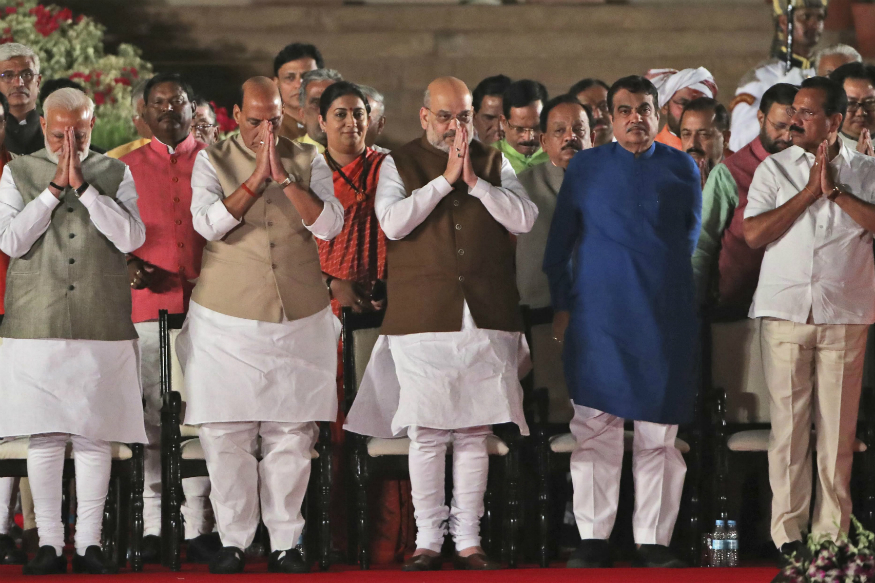 By spurning the single-berth offer in the Union council of ministers, Janata Dal (United) leader and Bihar chief minister Nitish Kumar has clearly indicated that he was not overawed by the larger-than-life image of Prime Minister Narendra Modi and that his own image and popularity has substantially contributed to the spectacular victory of the NDA in Bihar.

Nitish Kumar not only rejected the offer of symbolic representation in the ministry but gave a tit-for-tat reply to the BJP by inducting eight ministers from the JDU in his cabinet, leaving the BJP stunned and sulking. Most of the newly-inducted ministers are from the social groups that have been ignored by the BJP in the Union cabinet.

The BJP leadership, however, claimed that everything within the NDA was hunky-dory and that Nitish Kumar had offered BJP to fill party’s quota of the vacant ministerial seat but the BJP leadership decided to fill it in future.

Efforts are on from both the sides to send across a message that everything was fine within the NDA but the smooth relationship between the two allies before this episode seems to have gone for a toss. It has to be watched whether the BJP and JDU continue to remain under one umbrella till the 2020 assembly polls.

State president of the Rashtriya Janata Dal (RJD), JDU’s previous ally, Ram Chandra Purve and senior party MLA Bhai Virendra appeared exultant over the development and hinted that they were ready to welcome Nitish once again into the grand alliance. “The RJD always stood for secular forces to defeat the resurgent BJP,” they said.

It may sound stubborn on part of Nitish Kumar but he has played a long-term bet by rejecting the single-berth offer in the Union cabinet. It will come in handy for Nitish and cast its impact on the upcoming state assembly elections due next year in Bihar.

One of the major reasons for Nitish toeing a separate and independent line is its reservations on certain issues like Article 370 and 35A, which the BJP is likely to rake up aggressively in days to come.

The BJP has already announced its agenda through media advertisements during campaigning. The JDU could not have opposed them by remaining part of the Union council of ministers.

The BJP and the JDU have diametrically opposite stance on certain issues like construction of Ram temple in Ayodhya, uniform civil code, abrogation of Article 370 and annulment of Article 35A. While the BJP pursues these agenda vigorously, the JDU has maintained a distinct stance on them.

The Nitish Kumar-led party has always held that the vexed issue of Ram temple be solved either through a consensus among the affected parties or through a Supreme Court order. During the poll campaign, the JDU leadership had strongly opposed the demand for abrogating Article 370 amid the clamour for doing away with the special provision granting autonomy to Jammu and Kashmir.

Nitish has maintained that the JDU would never support any such move that deprived Jammu and Kashmir of a provision that has been in place.

Compared to 2014, the BJP has complete majority and therefore it wouldn’t be having any problem in pursuing these issues to a logical end. In such circumstances, the JDU would be in an awkward position to oppose Article 370 or Article 35A by remaining part of the Union cabinet. But it can oppose such issues, as and when required, by remaining within the NDA and outside the government.

Despite remaining in the NDA, the JDU has been cautious regarding its secular image and kept away from controversial issues. Of the 16 seats the JDU won this time, altogether eight seats are located in the region which has substantial population of the minorities.

By maintaining its secular image, it intends to get the benefit during the 2020 state assembly elections. It will come in handy if the party switches over to other combination or alliance after deserting the NDA.

Yet another but crucial reason for Nitish Kumar’s defiant stance is that the BJP is taking the sole credit for the poll victory in Bihar. The given impression that it was Narendra Modi tsunami that swept the polls in Bihar and throughout the country is being vehemently contested by the JDU leadership.

By claiming that it was the victory of ‘people of Bihar’, Nitish Kumar indicated that the Extremely Backward Caste (EBC) and Mahadalit vote bank nurtured by him over the years voted en bloc in favour of the NDA in Bihar. “The poll outcome was due to unflinching support of base votes of all the three constituents of the NDA in Bihar,” he said.

Apparently, Nitish also fears that the BJP buoyed by its huge majority may relegate the common agenda of the NDA and pursue its own pet agenda. In this context, the Bihar chief minister has categorically said that steps to eradicate backwardness of Bihar should be taken on a priority basis. The JDU leaders too have started raising the issue of grant of special status for Bihar ever since the poll results were declared.

The non-inclusion of EBC and Mahadalit MPs from Bihar in the Union ministry was also one of the major concerns of the Bihar chief minister. The BJP has appointed four out of five ministers from the upper castes, leaving the backwards, EBCs and Mahadalits. These sections might be annoyed by the socially lop-sided selection of ministers from Bihar.

It has also become clear from the tough posture of Nitish Kumar that he was not satisfied with the arbitrary attitude of the BJP leadership. JDU leaders contended that Nitish untiringly campaigned to bring Narendra Modi back to power but as the BJP crossed the magic number, it has started acting arbitrarily and want the allies to follow their diktats.

Despite opting to remain out of the Union cabinet, Nitish has pledged that he would continue to remain in the NDA. However, it is certain now that he would be treading cautiously in future.

Nitish has silently performed the role of a true ally during campaigning to ensure return of NDA to power but after this episode, the BJP cannot expect him to remain silent on many issues like article 370 or 35A.

The Bihar chief minister has also raised his reservation on the methodology of cabinet formation. During previous NDA regime led by Atal Bihari Vajpayee and Lal Krishna Advani, the proportion, ministries and other finer details used to be finalised in the very beginning. But this time, the BJP unilaterally decided single-berth formula for the allies and conveyed it to the respective allies.

“With one cabinet berth it would have been difficult for the JDU to ward off differences among various claimants in the 22-member JDU parliamentary party,” said Bihar JDU president Bashishth Narayan Singh.