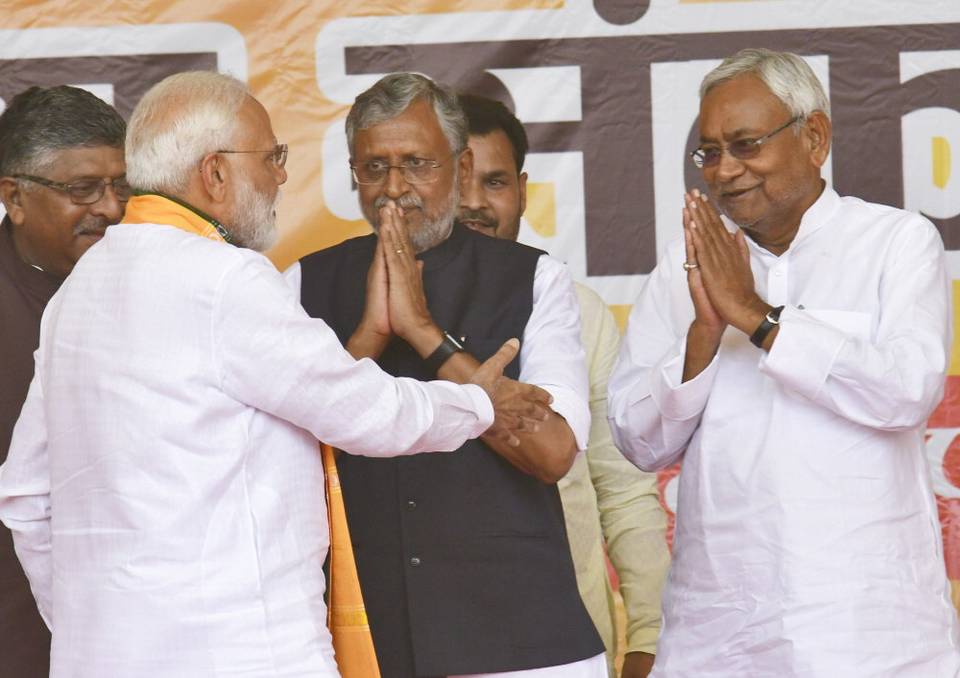 Days after party MLC Sanjay Paswan’s statement that Nitish Kumar should quit his post of Bihar Chief Minister and enter national politics, senior leader of Bihar Bharatiya Janata Party (BJP) and Deputy CM Sushil Kumar Modi on Wednesday tweeted to say, “Nitish Kumar is the captain of NDA in Bihar and will remain its captain in next assembly elections in 2020 also.”

Earlier, State BJP MLC Sanjay Paswan had urged Nitish Kumar to relinquish his post for the BJP, at least for one term.

“Nitish Kumar is the captain of NDA in Bihar and will remain its captain in next assembly elections in 2020 also…when captain is hitting 4 & 6 defeating rivals by inning where is the question of any change,” tweeted Deputy CM Sushil Kumar Modi. Mr. Modi is a senior BJP leader in Bihar and considered close to Mr. Kumar.

Mr. Sanjay Paswan had on August 9 created upheaval in the State’s ruling NDA alliance by saying, “Nitish Kumar should now step down from the post of Chief Minister for BJP…we trusted him for 15-long years and he should now reciprocate the same for the BJP for at least one term.”

Mr. Paswan had further said that, “When people are supporting PM Modi government on all issues like abrogation of Article 370, Ram Mandir, Triple Talaq and NRC, why should Nitish Kumar not relinquish his post for the BJP for one term in Bihar?” He also added, “He [Nitish Kumar] has been the Chief Minister of the State for long 15 years and now the BJP should get chance for the development of the state with the PM Modi model.”

Party sources told The Hindu that Sanjay Paswan might not have made such comment about Nitish Kumar without having a “green signal” from the top party leadership in Delhi.

Supporters of another Bihar BJP leader and MP from Begusarai, Giriraj Singh, have performed prayers to see him as the chief minister of Bihar. However, Mr. Singh, who is also a Minister in the Modi Cabinet, later explained that his supporters might have said this “in over-excitement out respect for him”.

The Janata Dal-United (JD-U), though, reacted sharply to Sanjay Paswan’s comment. “Only Nitish Kumar will be the face of the NDA in the next Assembly elections in the State and it has been accepted even by the top BJP leaders,” said party leader and spokesperson Nikhil Mandal, while another party leader and chief spokesperson Sanjay Singh asked Mr. Paswan, “Where were you during the 2015 Assembly poll when the people of Bihar had voted for Nitish Kumar and not the BJP?”

Leader of the Opposition in the State Assembly, Rashtriya Janata Dal’s Tejashwi Yadav, though, dared the CM to “contradict” what the BJP leaders were saying. “Has the CM guts to contradict what BJP leaders are saying? Is it not true that honourable Nitish Kumar got votes in the name of PM Modi without releasing his party’s manifesto and got 16 of his party leaders elected as MPs on the BJP manifesto [in the 2019 Lok Sabha poll]…Is it not true that he has been supporting the BJP on every Bill?…Then how come he is different?” tweeted Mr. Yadav.