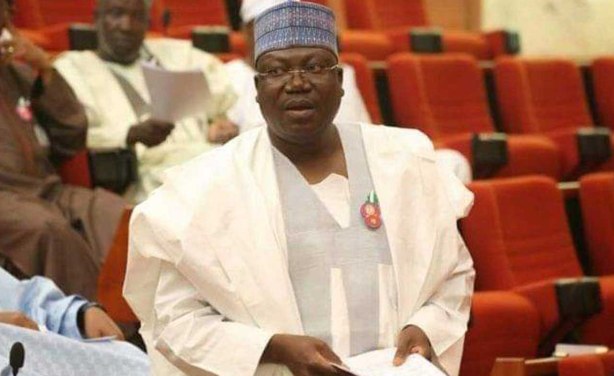 Abuja — Weeks of campaign, political intrigues and horse-trading at the upper legislative chamber climaxed yesterday with the election of Ahmed Ibrahim Lawan and Ovie Omo-Agege as Senate president and deputy Senate president.Leaving nothing to chance, the All Progressives Congress (APC) and the opposition Peoples Democratic Party (PDP) had ensured the event was preceded by a series of powerful meetings where battle strategies were mapped.

While the PDP adopted Mohammed Ali Ndume, hoping to checkmate the presidency’s alleged bid to pocket the National Assembly, the APC stockpiled its arsenal at ‘Fort Lawan’.Tension became highly stoked late Monday when an ‘Abuja court order’ suddenly emerged, threatening to down the hopes of lawmakers who banked on secret balloting. According to the document, the Senate standing rule of 2015 must be jettisoned for an open ballot method.

Anxiety went a notch further when the clerk of the National Assembly, Mohammed Ataba Sani Omolori, charged with conducting the election, was nowhere in sight while Ndume had already arrived at the chamber as early as 7:00 a.m. Ndume was followed by a candidate for the deputy senate president position, Kabiru Gaya (APC, Kano), who vowed to sustain his contest against Omo-Agege, the APC’s anointed candidate.

Gaya denied knowledge of the court order, saying that until proper information came through the right sources, he remained invulnerable to the pronouncement.The arrival of some APC governors and APC National Chairman Adams Oshiomhole left observers puzzled. News immediately began to fly that they had come to influence some aspirants to drop their ambitions for the party’s preferred candidates. This insinuation appeared credible as Gaya and another contestant, Francis Alimikhena, suddenly laid down their arms.

At 10:00 a.m., Omolori entered the chamber, announcing that he had received President Muhammadu Buhari’s proclamation of the Ninth National Assembly and declaring that the only business for the day would be the elections of the president of the Senate and his deputy.He told the lawmakers that the elections would be in strict compliance with Senate Standing Rule 2015, which permitted the use of secret ballot.

An uproar followed, with some senators including Barau Jibrin (APC, Kano State) objecting to the voting method and drawing the clerk’s attention to the court order. But others responded with shouts of “No court order! No! No!”The uproar continued for three minutes until Omolori restored order, warning he would not tolerate unruly conduct. He maintained that there was no court order served on him, and if there were any, he would not regard it.

Omo-Agege’s win might indicate the lawmakers ignored his alleged roles in the April 2018 snatching of the Senate Mace.Moments after the elections, Ndume addressed a press conference where he promised to work with Lawan. “Ahmed Lawan is my brother who is well experienced, having been here four years ahead of me. I will give him all the necessary support. I insisted on contesting against him in order to deepen democracy,” he said.

The bid by deputy Senate president of the Eighth Senate, Ike Ekweremadu, to seek re-election surprised many, as he had held the position consecutively for 12 years. A statement signed by his media adviser, Uche Anichukwu, congratulated Lawan and Omo-Agege, noting: “I have made my point and my colleagues have made their choice. It is now for us all to join hands across all divides to work for the success of the Ninth Senate and National Assembly as well as the peace and prosperity of our nation.”

While delivering his remarks at the end of the inauguration of the Ninth Senate, Lawan said his leadership would do justice to all. “Today means so many things. It is the commencement of another decade of our democracy and we will work to ensure best global parliamentary practices,” he promised, urging the support of his colleagues.

“We will not settle for anything less than the best. We will dream big, aim high and take good initiatives,” he added.

Buhari meanwhile has congratulated the newly elected officers.In a statement by his special adviser on media and publicity, Femi Adesina, yesterday, the president also commended the legislature for its patriotism and non-partisanship before and during the election. He described the fair conduct of the exercise as a plus for the nation’s democracy. He said the emergence of the new leaders is “a new dawn, different from duplicity and perfidy of the immediate past.” He further charged the winners to use their positions for the greater interest of the country.

He stated: “The Executive does not desire a rubber stamp Legislature. While separation of powers is essential, collaboration among all arms of government should be the name of the game. Opposition need not be virulent.”Stepping into the Next Level, the Legislature has a big role to play for the goals of the administration to be achieved. This is for the ultimate good of the nation. At the end of the day, we, the people, who elected our representatives at the national level, are the winners.”

This was as the group, Human Rights Writers Association of Nigeria (HURIWA) cautioned Lawan to defend the Nigerian Constitution and uphold the principles of separation of power.It also warned the senate president not to allow any third term gambit by Buhari, saying the country would collapse if any attempt were made to undermine tenure limitation.

In a statement by National Coordinator Emmanuel Onwubiko, the rights body said its “best advice to the president of Nigeria, Muhammadu Buhari, is to stick to the constitutional norms and pristine provision that guarantees separation of power encompassed in Sections 4, 5 and 6 of the 1999 constitution.”