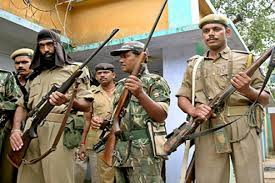 New Delhi: The National Human Rights Commission (NHRC) Monday sent a notice to the Bihar police chief over the death of a JD(U) leader in police custody, hours after he was picked up for interrogation in a kidnapping case. The family of the leader, identified as Ganesh Ravidas, alleged that he was tortured in police custody.

Ravidas was found hanging from the ceiling of a toilet at the Nagarnausa police station in Nalanda on Thursday night, sources earlier said. Three policemen have been arrested in connection with the case.

Ravidas, who was the block president of the party’s Mahadalit cell, was picked up for interrogation in connection with the kidnapping of a girl, wherein he was not named as an accused, the sources had said.

“The National Human Rights Commission has taken suo motu cognisance of media reports that a local leader of the ruling JD(U) in Bihar, who was detained by the Nalanda police in connection with a kidnapping case, allegedly hanged himself inside the police station late on Thursday night,” the NHRC said in a statement.

The commission observed that the content of the news report, if true, amounted to a gross violation of the right to life. “Accordingly, the commission has issued a notice to the Director General of Police (DGP), Bihar, calling for a detailed report in the matter within six weeks,” the NHRC stated.

The police authorities had also been told to explain as to why intimation in this regard was not given to the commission within 24 hours of the occurrence of the incident, the rights panel said. Ravidas was detained by police on 11 July night in connection with an alleged kidnapping of a girl residing in his village.

He was suspected to have helped the girl elope, the NHRC said, quoting media reports. When police interrogation was on, he went to use a washroom, which was outside the lock-up, where he reportedly hanged himself, it said.

“The news report further reveals that the victim was killed by the police station in-charge and chowkidar. It is also stated that there were cut marks on the body of the deceased, suggesting it to be a case of torture in police custody,” the statement read.