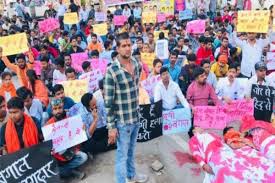 Various members of Hindu organisations, including Rashtriya Swayamsevak Sangh (RSS), Vishva Hindu Parishad (VHP), protested in Ranchi, Jharkhand on Sunday against the triple murder of a family in Murshidabad.

According to sources, at least 100 people joined the protest to show solidarity to the RS-associated family that was allegedly murdered in West Bengal’s Murshidabad district on October 10.

The agitators recreated the murder scene by performing a play, said sources.

The state police found the bodies of Bondhu Gopal Pal, a 35-year-old primary school teacher, his wife beauty, and, son which were found lying in a pool of blood at their residence in Jiaganj area of Murshidabad.

The incident came to light after the neighbours did not see the family members at the Vijayadashami celebrations in the area.

Videos and graphic photos the dead family members did rounds on social media platforms too.