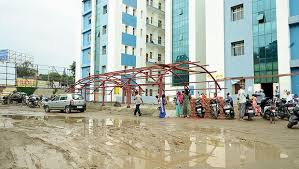 The absence of a proper approach road to the 500-bed super-specialty wing of Ranchi Sadar Hospital is causing a lot of inconvenience to patients and their attendants.

The road that leads to the extended hospital wing, which was inaugurated with much fanfare by chief minister Raghubar Das two years back, has turned slushy after rain making the hospital inaccessible to visitors.

On an average, around 2,000 patients and doctors visits the hospital every day .

“People have been facing this problem for the last one month. You can neither walk nor negotiate the stretch on a two-wheeler without risking a fall. Patients and their attendants are the worst-hit. The state health department should at least put a layer of stone dust or morrum on the slush,” said Ravi Prakash, the relative of a patient.

One of two newly constructed buildings functions as a maternity wing where 100 pregnant women and children come for treatment daily.

“The problem recurs every monsoon. The road turns mucky and the hospital premises becomes dirty even after a mild drizzle. It’s incredible that two super-specialty units of the sadar hospital don’t have a proper road,” one of the hospital employees said on the condition of anonymity.

stone dust or morrum. I don’t know whether the construction of the approach road and paver blocks are part of the project, but the problem can’t be left unattended,” Prasad said.

Prasad said the construction of the second building of the super-specialty wing would be completed by the end of December this year.

“We are also facing a problem regarding a designated parking space. We are going to ask the contractor to earmark a parking space,” he said.

The super-specialty wing, built at a cost of Rs 131 crore, has a curious past.

In 2011, JSBCCL undertook its construction and Bijeta Construction Company was awarded the contract.

In 2016, a PIL was filed in Jharkhand High Court over how the wing couldn’t be made functional even five years after the beginning of its construction. The health department had informed the high court that it would complete the construction of the first phase of the super-specialty wing by March 2017.