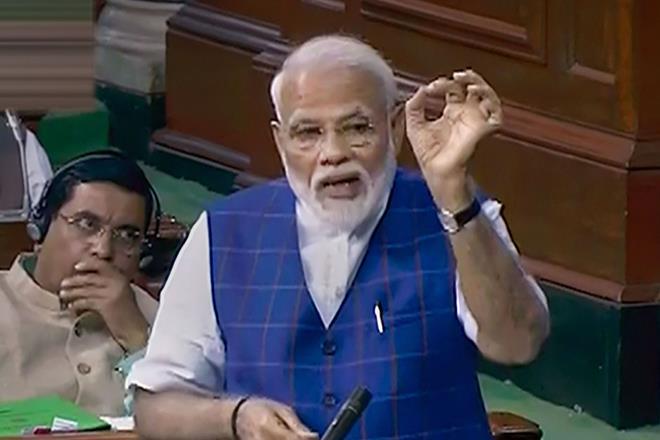 Expect the unexpected when the man in question is Narendra Modi. Known to spring up surprises more often than not, there was anticipation ahead of Prime Minister’s maiden address in Parliament after returning to power with a stronger mandate. A day earlier, Congress leader in Lok Sabha Adhir Ranjan Chowdhury had drawn a “gandi naali” analogy to target PM Modi. Contrary to expectations that Modi would shred the Congress leader in his speech over the lowly attack, the PM chose otherwise.

Of course, that did not deter him from launching an all-out attack against the Opposition, particularly the Congress, over a number of other issues. In his over 65-minute-long address, PM Modi did not spare the Congress for ignoring the contribution of former PMs like Atal Bihari Vajpayee, PV Narasimha Rao and Manmohan Singh. He took repeated digs at the Gandhi-Nehru family for its sense of entitlement and absolute disconnect with roots and also took a shot at Rahul Gandhi’s foreign jaunt immediately after the elections were over. “Even we wanted to relax after running around during elections for so long. But we do not think that way.”

The PM also reminded the Congress of the Emergency over how it crushed India’s soul on the day 44 years ago. Responding to a question by Chowdhury a day earlier on why Sonia and Rahul Gandhi were not in jail, when, as per the PM’s own claims, they are neck-deep in corruption, the PM said: “There is no Emergency in the country. Enjoy if you are out on bail.” The Prime Minister also pointed out how the Congress leadership had lost its connection with the masses, and in its lust for power even refused to acknowledge or appreciate the contribution of its own leaders outside the Gandhi family.

Yet, when Congress leaders emerged from the Parliament after the session, they claimed a moral victory. For, at the end of his address, the PM did what the Congress would never have expected him to do. Concluding his speech in the Lok Sabha on Tuesday, Modi quoted India’s first Prime Minister Jawaharlal Nehru. Adhir Ranjan Chowdhury said the Congress has scored a “great victory” as it had compelled Modi to quote Pandit Nehru’s words in his speech.

“I think we have scored a great success that at least the Prime Minister, who used to previously remain reluctant to recognise any Congress leader, was compelled to quote Nehru at the fag end of his speech. So, I think this was our great victory,” IANS quoted him as saying.

On Tuesday, Modi quoted an extract from a speech made by Nehru in 1951 at the release of the Congress manifesto for the first Lok Sabha polls in the country. “The biggest lesson to the world from India is that here, duties come first. From these duties emerge the rights. In today’s world, everyone talks about their rights and conveniences. Hardly anyone talks about duties. This is the reason for the friction in the world. It is true that we fight for our rights, but if we forget our duties, these rights will also not remain with us,” the Prime Minister told the Lok Sabha, taking his time to reveal that the “mahapurush” whom he had quoted was none other than Jawaharlal Nehru, urging members to understand his wish and see if it can be taken forward.

Congress has good reason to be surprised though one may doubt its contributions in “compelling” the Prime Minister to quote Nehru. The Prime Minister and the BJP are seen to be promoting the contributions of Sardar Vallabhbhai Patel and Mahatma Gandhi towards nation-building more than Nehru. The government’s push to honour all Prime Ministers at the Nehru Memorial has been a bone of contention between the BJP and the Congress. The grand old party has also often accused Modi of being opposed to the idea of pluralism and inclusivity that Nehru stood for, besides blaming the former of destroying institutions that Nehru built. Of course, praise for Nehru from arguably his biggest critic, is bound to delight them.

While the Congress is playing it smart by claiming victory for Modi’s choice of words, the Prime Minister has displayed that he is staying true to his promise of taking the Opposition along. There are some bills that still need the Opposition’s support to pass muster in the Rajya Sabha and the PM’s praise of Nehru could be an olive branch to the Congress. Also, by praising Nehru, the Congress’ tallest leader, could also puncture the Opposition’s charge of disrespecting their icons. In either case, it is Modi who has emerged as the smarter politician yet again.