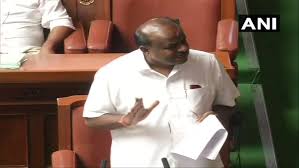 It is clear the JD(S)-Congress Government of Chief Minister H D Kumaraswamy in Karnataka has lost majority. It is also equally clear the CM is using every stratagem to delay the inevitable. But why is the State Governor, Vajubhai Vala, shooting off missives to the Chief Minister and the Speaker, K R Ramesh Kumar? Why cannot he let the warring politicians sort out the mess on their own? What is the Governor’s hurry, even if a case can be made out to justify his intervention? Yes, under the Constitution he is empowered to intervene, but when both sides are engaged in a naked power struggle, it is better that the Governor adopts a hands-off approach so long as it does not degenerate into something worse. Besides, Governor’s anxiety to set a short schedule for the trust vote creates the impression that he is leaning in favour of his former party and its leader of the Opposition in the State Assembly, B S Yeddyurappa, who is keen to replace Kumaraswamay as chief minister. Having said that, it is regrettable that the ugly Aya Ram, Gaya Ram sport that the rival politicians play with some relish invariably drags in the higher judiciary as the umpire. As a result, its independence and impartiality unnecessarily gets dragged into the bitterly partisan tussle for power.

In the current instance, the Supreme Court order that virtually nullified the power of the whip to force obedience allowed the leavers from the JD(S)-Congress to absent themselves from the trust vote, thus, giving the Opposition a clear advantage. Had the coalition partners retained the power of the whip, the deserters would have forfeited their membership for failing to attend and vote for the Kumaraswamy Government. On Friday, the ruling coalition, unheeding the two gubernatorial directions for conducting the trust vote, first, by 1.30 p. m., which later, in a second directive, was revised to 6 p.m., adjourned the proceedings till Monday, July 22. In the meantime, the coalition partners would again seek the SC intervention to a) withdraw its controversial order allowing legislators freedom to decide whether or not to attend the House and, b) to challenge the validity of the Governor’s action in setting time for the confidence vote. It is argued that the Governor could not have intervened during the debate on the trust vote while he could have done the same before its start.

The Supreme Court being asked to intervene in these matters, which of course diverts its time and attention away from disposing the mountain of long-pending cases before it, ought to be unwelcome. As cited above, even if its pronouncements are meticulously fair and just, it is bound to displease one party or the other. In these days of a bitterly divided politics, it does not enhance the image and dignity of the court to be dragged in almost on a regular basis in matters involving wholly unprincipled power struggle in one State or the other.

A set of guidelines on the constitutional dos and don’ts, clear red-lines so to speak, ought to be framed by the higher judiciary so that it can be insulated from the inter- and intra-party disputes of the nature that we now witness in Karnataka. In some way, Karnataka’s game of defections with all its attendant consequences has nothing new. We have been there before several times. Therefore, a Standard Operating Procedure for Aya Rams and Gaya Rams in all its permutations and combinations ought to be put in place. The Supreme Court, when the new set of petitioners knock on its door seeking reversal of its order freeing the coalition’s defectors from the obligatory attendance in the Assembly is taken up on Monday, ought to consider appointing an amicus curie to frame the above-mentioned SOP. Since politicians are unlikely to stop playing the game of defections, we cannot have the highest court in the land being dragged in their power struggles on a regular basis.