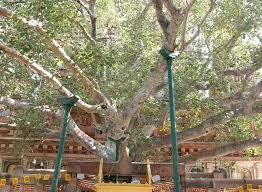 Archaeologists may find history on the ocean floor, inside caves and buried underground. But it is also interesting to see how a living tree has shaped human history.

In the subcontinent, particularly in India, the Peepal (ficus Religiosa or Banyan) tree is known as the Bodhi or wisdom tree. Men of legend and faith, Lord Buddha and King Ashoka, have sat under it in meditation. Mahatma Gautama attained Buddhahood (enlightenment) sitting under the shade of the Bodhi tree at Bodh Gaya in India and hence it is known as the Mahabodhi tree or the tree of great awakening.

A direct linear descendant of the Mahabodhi tree was presented to President Ayub Khan when he visited Sri Lanka in December 1963. Zulifqar Ali Bhutto, then the foreign minister of Pakistan planted the sapling in a simple ceremony on January 18, 1964, in the Taxila Museum.

“We have failed to receive the boon we should have from the Mahabodhi tree here in Pakistan,” laments Dr Saifur Rehman Dar, celebrated author, archaeologist and former Director General Department of Archaeology and Museums (DOAM) Punjab. At the time of the plantation of this living relic of Gautama Buddha in Taxila, Dar was the museum curator.

Buddhists have great reverence for all religious relics such as the bodily remains of the Buddha, left over after his cremation. They erected stupas over the remains. The Dharmarajika Stupa in Taxila is one of the eight erected by Ashoka to contain the remains of the Sakya Muni.

It is in the same tradition that the Bodhi tree is revered. Since it is a living plant, it is said to be a living connection to Mahatama Budha and the event of his finding enlightenment sitting under it. It is believed that the Buddha sat meditating under the tree for seven weeks without food or water. And after attaining enlightenment, Buddha spent seven days standing in front of the tree gazing at it with gratitude. Buddhists consider the tree as an individual in its own right and it is venerated and approached with piety.

In fact, the original Mahabodhi tree in Bodh Gaya, India was killed thrice in recorded history. The first time was around 230 BC, when Tissarakkha, the jealous second wife of Mauryan Emperor Ashoka the Great, destroyed it with poisonous Mandu Thorns.

According to the seventh-century Chinese traveller Xuanzang, who wrote of the tree in detail, the tree was again cut down in the second century BC by King Pushyamitra Sunga, a violent ruler and persecutor of Buddhist beliefs. The last time was in 600 CE by King Shashanka, when Budhism went into decline and survived only outside India in Tibet, China, Nepal, Myanmar, Sri Lanka, the Far East and Japan.

There is considerable doubt whether the present tree in the Sri Mahabodhi Temple in Bodh Gaya, Bihar, is really a scion of the original tree. Indeed, the present Mahabodhi tree, planted at the original location in 1881 by British archaeologist Alexander Cunningham — after the earlier one was destroyed in a storm in 1876 — likely represents the successor of a long line of substitutions.

Fortunately, Mauryan Emperor Ashoka’s son Mahindra, and a Buddhist nun Sanghamitta Maha Theri — said to be Ashoka’s daughter and accordingly called a princess — had brought the southern branch of the original Mahabodhi tree from Bodh Gaya to Anuradhapura in Sri Lanka in 236 BC. According to Buddhist sources, the Buddha had resolved five things on his death bed; one being that the branch that detaches itself from the tree should be taken to Sri Lanka for propagation. This tree lives on and is called the Jaya Sri Maha Bodhi. The Mahabodhi tree in the Taxila Museum is a plant cloned from the Sri Mahabodhi tree and is the closest authentic link to the living Buddha.

It is, however, unfortunate that the Mahabodhi tree in Taxila has been neglected and starved of sunshine. Surrounded by tall trees in the backyard of the Taxila Museum, it has grown tall and lanky like a reed. Dar suggests the DOAM should consult experts to ensure the Mahabodhi tree is nourished to good health. “It is a national treasure and will go a long way in attracting more Buddhist tourists to Taxila and Gandhara,” he says.

The current curator Taxila Museum, Mohammad Nasir Khan, says the impression that the Bodhi tree has been forgotten is incorrect. “Recently, we had the cement removed from around the Bodhi tree so that it has only soil around its roots and the trunk. A safety enclosure has also been constructed round it to keep it safe from being vandalised or accidently damaged by visitors to the museum.”

The executive director of the Centre for Culture and Development Dr Nadeem Omar Tarar believes that the DOAM should form a committee of experts to ensure care for the Mahabodhi tree in Taxila. “They should try to root cuttings from it, rather than have a significant cultural marker of Buddhism grow in isolation in the backyard of the museum,” he says. Tarar has been working to promote a revival of Gandhara art, culture and scholarship in Pakistan to attract religious tourism from abroad. He is also rallying support to use the Taxila Mahabodhi tree for scion wood (a technique used for grafting) to establish Mahabodhi trees at all the important Buddhist sites across the greater Gandhara region, starting from the Buddhist temple in Islamabad.