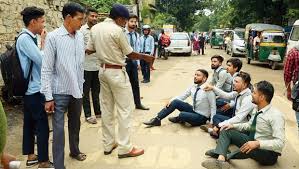 Friday was almost unreal in the capital city. Almost all thoroughfares bore a deserted look. Even auto-rickshaw drivers, who are notorious for overloading, wrong-side driving, picking and dropping passengers at will from the middle of the road, were driving cautiously. Many autos stayed away from the road.

Traffic policemen attributed it to the fear the new Motor Vehicles Act, which has radically hiked fines for offences, has struck in the hearts of motorists. The decision of the Ranchi traffic police department to recommend suspension of licence of offenders for a period of three months has aggravated the fears, they said.

“Right from the morning traffic remained quite smooth,” said a traffic constable at Ratu Chowk. “Even during the peak hours of 9am to 11am when people rush to offices, there was less traffic than usual. That means people who don’t have proper documents of their vehicle are scared of venturing out on the road.

“Though the new Motor Vehicles Act is harsh in terms of fine and punishment, it has some positive impact,” he added. “Now the new rule fixes liability on parents with three years of jail and Rs 25,000 fine if their juvenile son or daughter is caught driving.”

The traffic policemen continued the enforcement drive through the day.

On Thursday, state transport commissioner Praveen Toppo issued a directive to the traffic police department saying that if anyone empowered to enforce provisions of the new law is found committing an offence under the same law, that person will be liable to for twice the penalty mandated for that offence under the new law.

“He was driving the bike and an ASI (assistant sub-inspector)-rank official was the pillion rider,” SP Dungdung said on Friday. “We can’t just ignore that he is from traffic department and was on duty.

“We can’t preach people to follow traffic rules and fine them when our own staff are not following the rules,” he added. “Though he was wearing helmet but pillion rider was without helmet hence he was imposed a fine of Rs 2,000. Then I started checking every paper of his bike. He was not carrying driving licence, the bike was without pollution-under-control certificate and it was not insured.”

The SP insisted that there would be no leniency in taking strong action against government vehicles and public servants.

A state government employee, who works at Project Building, said that for the past four days he has not been using his two-wheeler to go to office.

“The pollution certificate and insurance of my bike expired around two years ago. I did not get time for renewal, and honestly speaking I just ignored it because police never checked for these documents except helmet, driving licence and registration papers,” he said. “Today (Friday) I got the insurance policy paper but getting the pollution-under-control certificate is a challenging job because I will have to take my bike to the testing centre and there is no guarantee that I will not be caught on the way there.”

Awdhesh Kumar, an auto-rickshaw driver, said he had kept his vehicle off the road for the last three days as its pollution-under-control certificate had lapsed a month back.

“Early morning tomorrow (Saturday) I will visit the pollution testing centre to get the certificate,” he said. “It is safe early morning because traffic cops generally join duty around 9am. I can’t risk driving and paying the fine. I have already borrowed money to buy the auto-rickshaw. I also carry some children to school. I have stopped it till I have proper documents,” he said.

“Auto drivers fear that they will have to pay huge penalty for minor faults,” he added. “They also park randomly, pick up and drop passengers anywhere on the road. I will request the traffic department to properly train them about the law,” he added.