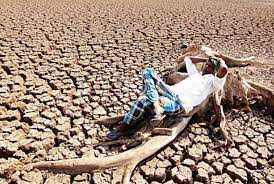 Patna: Jogendar Mandal and his co-villager Kamlesh Yadav are worried over poor monsoon even as of the first week of July. Both are marginal farmer of Banka district, they fear another drought this year with state recorded 41 percent less than the normal rainfalls in June and 43 percent less than normal rainfall in July so far ,as per the rainfall report of Indian Meteorological Department.

Mandal and Yadav are two of thousands of farmers of Banka, one of the districts facing drought-like conditions — Jamui, Bhagalpur, Munger and Lakhisarai being among the other affected districts.

“We have no idea or clue to predict weather, but dry spell so far during the time of heavy rains indicate that something is bad in-store for us. Rain gods are giving us sleepless nights this time like last year. It appears we may face another drought,” said Mandal, in his early 40s, sitting on a locally made bamboo cot. He told Newsclick that thanks to mobile phones, he has been able to get connected to outside his village.

Poor monsoon in Bihar, as of July 4, has affected paddy sowing — triggered fears of another drought among millions of the state’s farmers, agriculture scientists and officials.

Even chief minister Nitish Kumar recently said he feared another spell of drought in Bihar. Taking the issue of dry spell and water crisis seriously in Bihar, the state government and state legislature have decided to organise a special debate on July 13 in the central hall of the state Assembly here to discuss the issue and measures to tackle the challenge by taking feedback from legislators.

With water problems creating havoc among people, on the directive of chief minister Nitish Kumar a special debate would be held. All legislators including ruling parties and opposition will attend and will present ground reality of water problems in their respective constituencies before the government.

The state government has targetted paddy cultivation on 33 lakh hectares this year. But till date, paddy seedlings have been reported on about 3.30 lakh hectares.

“What is alarming is that paddy saplings transplantation delayed, so far transplantation is reported in only 93,000 hectares, it is 2.83% of the targetted. Besides, no sapling transplantation started in 27 of 38 districts,” another official told Newsclick here.

“Farmers are also getting restless about transplanting paddy seedlings in view of the lack of water,” said Mandal. He said that paddy seedlings were badly hit in over two dozen districts. All these districts are facing drought-like situation, he said. The state government would provide diesel to farmers at subsidised rates under a contingency plan to cope with the drought-like situation, he added.

According to government’s own data, nearly two-thirds of Bihar’s population of 11 crore are dependent on agriculture for their livelihood.

Not only that, nearly two-thirds of all agricultural activity in the state is dependent on the rains. Most of them are small and marginal farmers.

For most of the state’s population, therefore, a good monsoon is often the difference between life and death.

Agriculture is the backbone of Bihar’s economy, employing 81% of the workforce and generating nearly 42% of the state’s domestic product, according to the state government’s figures. About 76% of Bihar’s population is dependent on agriculture for livelihood.

Reports reaching Patna said unlike the past, there is no water for irrigation in the canals. A large part of central Bihar is irrigated by water from the Sone river, brought through canals.

A few farmers have managed to save paddy seeds sown last month by pumping ground water and others are trying to do the same now.