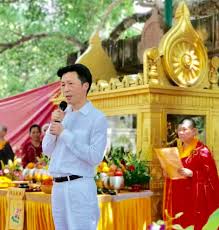 On September 15th, at the invitation of the Kolkata Chinese Buddhist Association, Consul General Zha Liyou attended the Celebration Prayers for the 70th Anniversary of the Founding of the People’s Republic of China and the 72nd Anniversary of the Independence of the Republic of India, jointly organized by the Bodh Gaya Chinese Temple and the Mahabodhi Temple.

On the morning of the same day, accompanied by the Chinese lion dance performance, participants of the event left the Chinese Temple and walked to the Bodhi Tree of the Mahabodhi Temple. Monks devoted themselves to chanting of Song Of The Triple Gem, praying for the anniversaries of the two countries and stable development of the bilateral relations.

The Consul General delivered a speech and expressed his pleasure to join the prayers for the two countries at the Mahabodhi Temple. China learned Buddhism from India and becomes the largest Buddhist country in the world. As two ancient civilizations in Asia, China and India have achieved remarkable development achievements benefiting their people and making great contributions to prosperity and development of Asia and the world, as well as building a community with a shared future for mankind. He hoped that the event would create a good atmosphere for the development of Sino-Indian relations in the new era, and people from all walks of life including Buddhism would continue to support the development of Sino-Indian relations and contribute to people-to-people exchanges between the two countries.

Master Huirong and Chief Monk Chalinda thanked the people from all walks of life for attending the prayers and jointly praying for the health of Prime Minister Modi and President Xi Jinping and their upcoming informal meeting in India, as well as bilateral relations and people of the two countries, and both firmly believed that the prayers will definitely become true.

Prof. Bidyut Chakrabarty, Mr. N. S. Dorjee, and Ven. M Medhankara Thero highly appreciated the prayers and wished it a complete success and the best of the Indian-China relationship.

Mr Zha and his wife jointly presented the guests with souvenirs specially made for the 70th Chinese National Day. With the monks chanting the Mahamangala Sutta and the distinguished guests lighting the candle devoted to Buddha, the event was successfully concluded.

Times of India, Hindustan, Bodh Gaya TV and other local media were present to report the event, and interviewed the Consul General.