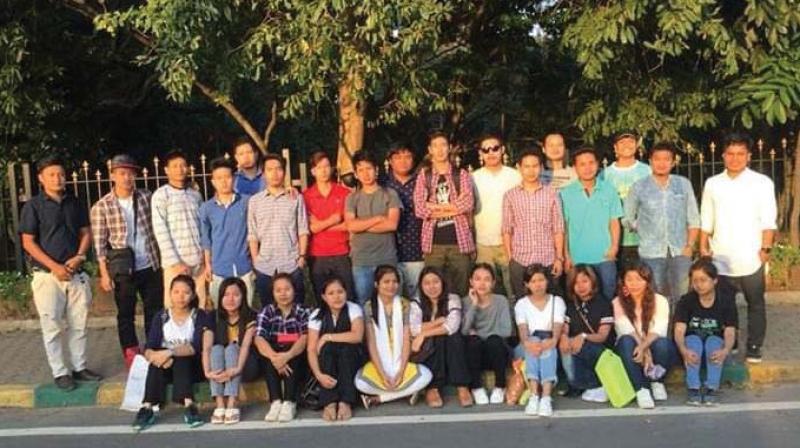 As they are Buddhists they faced religious persecution in Bangladesh and fled the hill tract in 1964-1965.

Bengaluru: The Chakmas are ethnic people settled in Chittagong hill tracts, and are predominantly located in Bangladesh, and Mizoram, Tripura, and Arunachal Pradesh in India.

As they are Buddhists they faced religious persecution in Bangladesh and fled the hill tract in 1964-1965. The Indian government gave them asylum in India and set up relief camps in Arunachal Pradesh.

It has been more than five decades since they have settled in India, but they often face hostility from the local population in Arunachal Pradesh and Mizoram, as they fear the influx of Chakmas may change the demography of the region.

In order to secure the rights of the tribe and to lend a helping hand to the community settled in Karnataka, the Chakma Students’ Association of Karnataka was formed in 2014.

The NGO has been running on donations and has become a temple for more than 400 people settled in the city from the community.

“In the weekly or monthly gatherings at the Cubbon Park or the Mahabodhi temple, we discuss the issues concerning the tribe. The entire idea took birth because in a cosmopolitan city like Bengaluru there was no student body that could have looked for Chakmas,” says Abhish Chakma, president of the association.

The association lends a helping hand to the Chakma students from Bangladesh as well.

In a tragic incident on December 31, 2016, a student from Tripura succumbed to injuries after he fell from a building in the city.

“We sent his body to his hometown through flight. At that stage, a lot of people came forward to help. We not only keep our culture alive in Bengaluru, but also protest against the injustice meted out to us in the North East,” he added.

To instill the sense of unity, the association has been celebrating their festivals like Bizu and even organises sports activities.

Abhish is grateful to the city police for being considerate towards the demands and struggle of the Chakmas.

“Apart from providing venues like Town Hall and Freedom Park for our protest, they ensured security for us. The state government has also supported North East festivals and we hope that this affection continues,” he remarked.

A few years ago, the association through the state government sent a memorandum highlighting the plight of the tribe in the Arunachal Pradesh to Prime Minister Narendra Modi and the foreign ministry also.

“Our script and language are not recognised in the Public Service Commission exams. Our schools were burnt in Mizoram. In 2015, the rules were amended to give preference to the Zo-ethnic students. We are deprived of technical education and the government jobs. We are treated as second class citizens,” Abhish lamented.

He wants to make the association strong and expects that the government would pay heed to their voice that was often stifled.