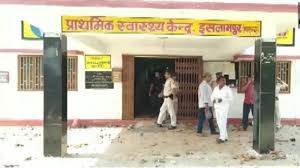 Relatives of a woman in Islampur of Nalanda, Bihar, pelted stones at a primary health centre and vandalised property after alleged theft of the woman’s newborn.

On Friday night, the pregnant woman’s family had come to a primary health centre in Islampur for the delivery of the child.

However, the infant was stolen by another woman from the hospital, media reports said.

Following which, aggrieved family members of the woman resorted to violence by pelting stones and destroying the health centre’s property.

The video of furious relatives pelting stone at the health centre is being shared on social media.

In the video footage, the woman’s family members were seen throwing stones at an ambulance that was parked outside the hospital.

Commenting on the matter, Vaibhav Chaudhary, SDO, Hilsa, Nalanda, told news agency ANI that the woman was brought to the health centre on late Friday night and she gave birth at 9 am on Saturday.
He further said that the police is looking into the matter and an investigation is underway.
However, he said, the situation was soon brought under control.